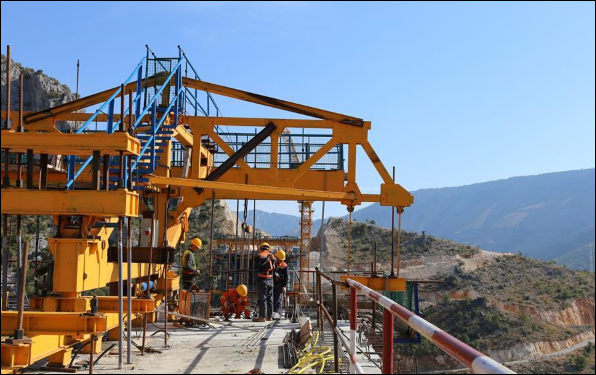 Photo taken on Sept. 22, 2018 shows the construction site of the Moracica bridge of Montenegro's first highway, about 14 km north of the capital Podgorica. (Photo: Xinhua)

From the European Union (EU)'s massive funding program the "Connecting Europe Facility" to US President Donald Trump's commitment of building "gleaming new roads, bridges, highways, railways, and waterways all across our land," infrastructure is high on the agenda of many countries.

But when it comes to Montenegro, likely the next member state of the EU, local politicians and the global news media have derided plans to build a highway as "not economically viable."

It is beyond dispute that Montenegro needs a highway. Anyone who has visited the small but stunningly beautiful country could attest to that.

For years, the country on the southern Balkans has been trying to seek outside support in building its first highway, but its endeavors proved to be futile.

When China offered to help the country construct a highway under the Belt and Road Initiative with funds and expertise, the West cried foul.

A "highway to nowhere" -- that was how a Reuters report described the project which is designed to link Montenegro's southern port of Bar to its northern border with Serbia and turn the natural moat of the Moraca river canyon into a thoroughfare. Hardly a "highway to nowhere" as some Western critics claimed.

The report looked at Montenegro's soaring debt, but failed to mention that Montenegro received an 809-million-euro ($937 million) loan from China for the first stretch of the highway at a 2 percent interest rate, lower than the average global inflation rate of some 3.3 percent between 2012 and 2017.

It talked about insufficient traffic volume to justify the proposed scale of the highway and inadequate return on investment, but stopped short of envisaging what the highway will bring to the landlocked areas of the country -- for instance, shortened travel time, more tourists, easier trade and investment, as well as other benefits.

In other words, it looked at a developing situation from a stagnant perspective.

In addition, the Montenegrin government has implemented an ambitious fiscal consolidation program to keep its finances in order.

Both the International Monetary Fund (IMF) and the World Bank have recognized the fact and reckoned the country will see a budget surplus in 2020.

If Montenegro sticks to its current fiscal path, government debt will drop to 53 percent of the country's gross domestic product (GDP) by 2023, according to the IMF.

Also, the allegation that China is buying political influence in Montenegro, a member of the North Atlantic Treaty Organization (NATO) and on track to join the EU, is utterly groundless since China has never attached political conditions to its commercial contracts nor imposed its own political will on other countries.

On Sept. 19, the European Commission released a strategy for better connecting Europe and Asia, laying out the need to invest in infrastructure projects of less-developed countries and expressing willingness to cooperate with China and other Asian countries.

The Montenegro highway, as a model project of connectivity, should be welcomed with a spirit of cooperation instead of suspicion. It is undeniable that the construction of the highway would benefit Montenegro and the region.