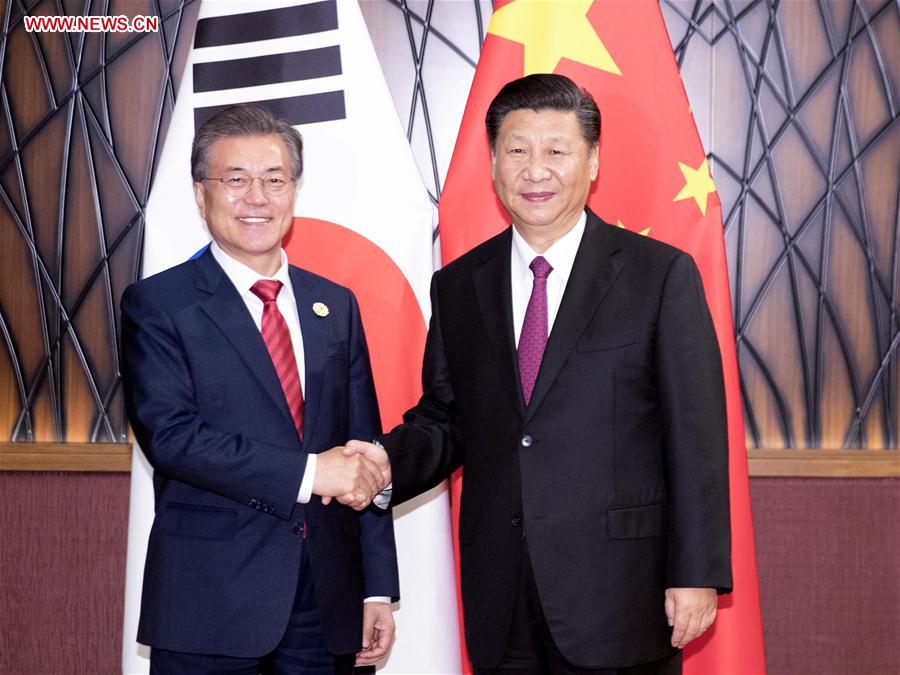 This year marks the 25th anniversary of the normalization of diplomatic relations between China and South Korea. After what has been a rather prolonged political conflict over the last year and a half, the two countries have finally agreed to put the past behind and move bilateral relations forward. South Korean Foreign Minister Kang Kyung-wha met with his Chinese counterpart Wang Yi in Beijing on November 22, where they jointly announced President Moon Jae-in's December state visit to China. As for policy, Moon will most likely try to avoid discussing the issue of the Terminal High Altitude Area Defense (THAAD) system, while at the same time try to harness China's support for resolving the North Korean nuclear issue. The TPY-2 radar that comes with the THAAD installation has resulted in a conflict of security interests for both countries. From Moon's standpoint, the North has been very provocative in recent months - test-firing missiles on several occasions since his inauguration in May, including a hydrogen-bomb in September. Yet, THAAD is a US strategic asset dispatched by the United States Forces Korea. While not dismissing the risks, and knowing of the many suspicions revolving around its impact and usefulness, the incumbent South Korean government has agreed to THAAD deployment for national security reasons, despite fierce opposition from China.On Thursday, Moon attended the China-ROK Economic and Trade Partnership Symposium and gave a speech at Peking University. He then travels to Chongqing.Chongqing is an important city for South Korea, historically and economically speaking. It was once the base of the "Provisional Government of the Republic of Korea" against imperial Japanese forces during World War II. Economically, Chongqing is a key location for China's "go west" strategy and stands at the crossroads of China's Belt and Road initiative. South Korea's conglomerates, Hyundai Motor and SK Hynix, have factories operating in Chongqing. Meanwhile, President Moon recently laid out an ambitious foreign policy concept titled "New Northern Policy" and "New Southern Policy." His team will try to find ways and strategies to intertwine diplomatic concepts with the Belt and Road initiative in Southeast Asia and the Eurasian continent. Hence, Moon's visit to Chongqing from both a historical and economic perspective is evidence that South Korea is a reliable partner for China and that there are more areas for future cooperation.Finally, various world elites have recently made visits to North Korea. Russian lawmakers visited Pyongyang in late November as a sign of mediating North Korean denuclearization talks, and a few days later, UN Under-Secretary-General for Political Affairs Jeffrey Feltman also made a surprising visit to Pyongyang. Against this backdrop, the summit between Chinese President Xi Jinping and Moon is important as they can use this momentum to invite North Korea to the negotiating table. One way of doing so will be by encouraging Pyongyang to attend the Winter Olympic Games, which will be held next year in the South Korean city of PyeongChang from February 9 to 25. Hosting international sporting events is an important part of countries' governance initiatives, especially for North Korea. South Korea has so far proposed the combining of ice hockey teams and co-hosting of ski resorts. If such joint collaboration can be realized, it could help reduce tensions, create a momentum for future cooperation and accumulate trust between the North and South. For this, China can assist by acting as a supporter and provider of assurance to Pyongyang.