SEOUL, Feb. 7 (Yonhap) -- President Moon Jae-in expressed hope Friday that China will defeat the ongoing viral outbreak at an early date and pledged South Korea's active support for the "close neighbor" to that end, as he greeted Beijing's new top envoy here at his office, according to Cheong Wa Dae.

After receiving Xing Haiming's credentials, Moon had a conversation joined by Tokyo's new ambassador to Seoul, Koji Tomita, who also presented the president with his credentials in an official ceremony.

Moon expressed his sympathy for the "big trouble" the Chinese government and people are undergoing due to the virus and wished for the quick recovery of patients there, Han Jung-woo, director of Cheong Wa Dae's Chunchugwan press center, said in a press release.

Moon was quoted as telling Xing, "The South Korean government will provide support for the Chinese government more actively to (help) resolve the novel coronavirus problem as early as possible." 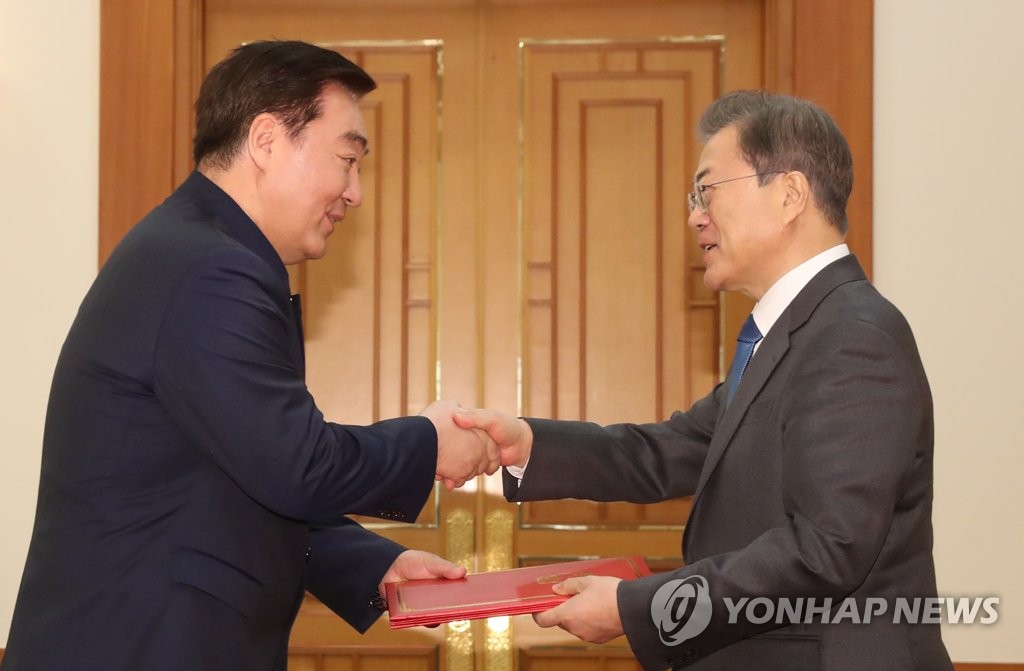 Once China rides out the crisis and refocuses on economic development, Seoul-Beijing relations will develop faster, he added.

The ambassador said his government will endeavor to overcome the difficulties and that he was especially impressed by Moon's statement that China's suffering is that of South Korea.

Xing reaffirmed Beijing's commitment to support and cooperation for the denuclearization of the Korean Peninsula and a process for permanent peace.

Moon replied that it is natural to help a "close neighbor" in need.

He also took note of Xing's experience and expertise on Korean Peninsula affairs as a veteran diplomat who has served in both South and North Korea for a long time.

Moon said Xing's service in Seoul is expected to contribute to not only Seoul-Beijing ties but also inter-Korean relations.