Multinationals shift from 'Made for China' to 'Made with China'

Strategic shift from 'Made for China' to 'Made with China'

As China's reform and opening-up policy continues, transnational enterprises are gradually adjusting their strategy in the world's second-largest economy, which has gone from a place to make things more cheaply to an innovation hub, said entrepreneurs and experts on Tuesday. 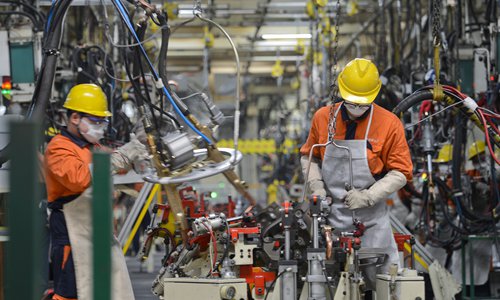 Chen Liming, chairman of the Greater China Group at IBM Corp, told a session during the ongoing annual meeting of the 2018 Summer Davos Forum in North China's Tianjin Municipality on Tuesday that at the beginning of China's reform and opening-up, a major lure for foreign companies was the huge Chinese market.

"From a commercial perspective, a market means business. Many transnational companies brought their products here via trade and we call that period 'Made for China'," Chen said.

Yasushi Akahoshi, president of the Japan External Trade Organization, said back in that era, companies were mainly interested in China's cheap labor costs. Now, those costs are almost the same as in Japan.

"Instead of saying China is losing advantages in terms of cheap labor, I think the country offers new attractiveness through its high technology, innovation ability and rising start-ups, which are transforming China's economic growth model," Akahoshi told the Global Times on the sidelines of the session on Tuesday.

The huge Chinese market is still a big advantage, he added. "China is a developing country, but consumers are pursuing more quality goods, especially in the first-tier cities."

Ecosystems built by innovative start-ups in cities such as Shenzhen, South China's Guangdong Province, can help Japanese companies in sectors including elder care. In Japan, those aged above 65 years old account for one-third of the population, Akahoshi noted.

Evolving from the longstanding strategy of "Made in China," multinationals are now choosing "Made with China," Chen said.

Amid the Fourth Industrial Revolution, these multinationals are trying to change their roles in the Chinese market by working with domestic players in line with the country's development path, Chen explained.

IBM has localized all its businesses in China, having its own research and development institutes as well as global delivery center. It has no joint ventures in the global market except for China.

In September 2017, Chinese hardware and software manufacturer Inspur Electronic Information Industry signed an agreement with IBM's China branch to form a joint venture covering the manufacturing and sales of servers.

Reflecting on four decades of reform and opening-up, Xu Niansha, chairman of State-owned China Poly Group, said during the session that the biggest challenge was the shift from a planned economy to a market-driven one, from the totally closed state to an open one.

"China has come a long way to today's achievements, and China should continue sticking to the reform and opening-up policy. In the meanwhile, it's better to hide strength and bide time instead of competing for the No.1 position" globally, EY China Chairman Albert Ng told the Global Times on the sidelines of the forum on Tuesday.

"Innovation and consumption are bound to be the future engines of China's economic growth," Ng said, pointing to strategies such as the Belt and Road initiative, Guangdong-Hong Kong-Macao Greater Bay Area and mixed-ownership reform of State-owned enterprises. All these require down-to-earth implementation, he said.