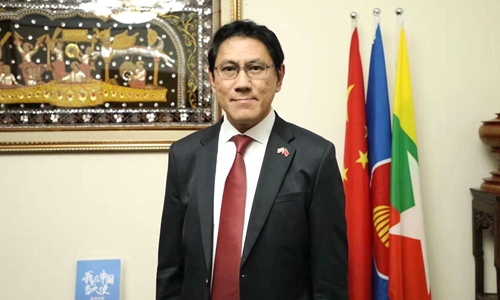 As a neighboring country to China, Myanmar has no plans to close its border amid the outbreak of the novel coronavirus pneumonia (NCP). There is no need for measures that "unnecessarily interfere with international travel and trade" in order to halt the spread of the NCP, Myanmar Ambassador to China told the Global Times in an exclusive interview, echoing the advice of the World Health Organization.
Myanmar Ambassador to China U Myo Thant Pe said that Myanmar "highly recognizes the Chinese government's efforts and measures" in preventing and controlling the NCP epidemic.
Building two new hospitals for patients with NCP within 10 days shows China's decisive measures and great commitment to curtailing the spread of the virus, he said.
The ambassador noted that as China has advanced medical technology, Myanmar is confident that the Chinese people, under the leadership of the Chinese government, will definitely overcome this challenge.
"Myanmar stands firmly with China and Myanmar will cooperate with China in finding ways to overcome this difficult situation," he said.
According to the ambassador, the Myanmar government has neither closed the border with China nor restricted Chinese travelers.
"The border between the two countries remains open for trade," he said.
The ambassador said the Myanmar government has implemented measures in an effort to protect citizens. People's temperatures are being screened at airports and border gates, which is an important preventative measure to stop the virus from spreading.
He stressed that Myanmar will be taking serious measures to prevent the virus from spreading into Myanmar, while at the same time, it will maintain the flow of trade with China.
Some recent Western media reports hyped that the NCP "forces China's neighbors to make tough choices over health, fear and trade." Commenting on these reports, the ambassador said "concerning the reports of Western media, Myanmar will identify the news only from the trustworthy source of news."
China and Myanmar have witnessed further development of bilateral ties this year as the two countries carry forward traditional "Paukphaw" (fraternal) friendship. On China's twitter-like Sina Weibo, many netizens also expressed gratitude to Myanmar people for supporting China during this difficult time.
Some netizens shared posts saying Myanmar people were throwing medical equipment across the border, including medical masks and thermometers, to help Chinese people fight the NCP.
The ambassador said domestic organizations, federations and individuals from Myanmar have donated medical supplies, including disposable medical masks, gloves and other supplies through the Myanmar-China border gate at the Myanmar city of Muse to help control the epidemic.