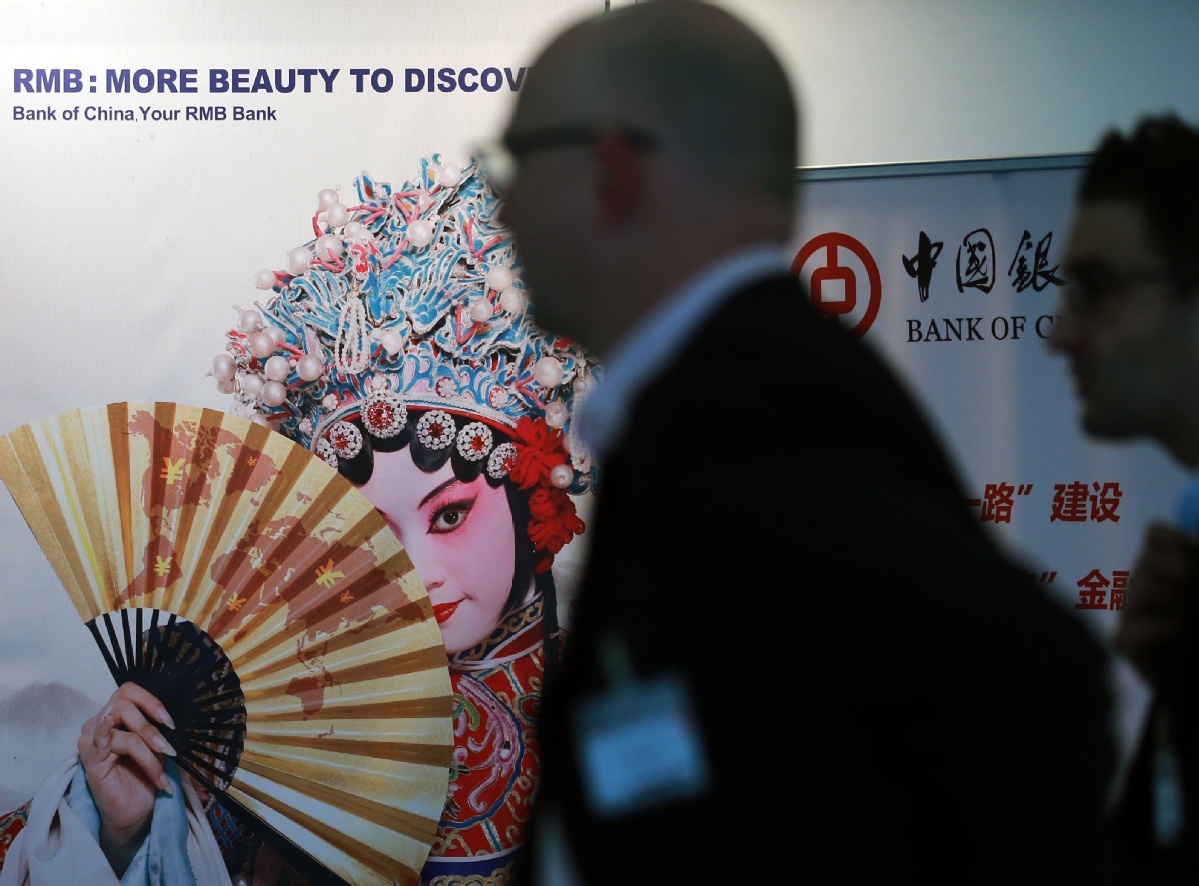 A participant walks past the booth of Bank of China during a financial expo in Frankfurt, Germany. (Photo: Xinhua)

China will continually strengthen economic and financial relationship with Germany, to consolidate bilateral financial cooperation and jointly promote international economic governance in face of challenges, said a statement from the Ministry of Finance on Wednesday.

The statement was issued before German Chancellor Angela Merkel's official visit to China from Sept 6 to 7 at the invitation of Premier Li Keqiang. Foreign Ministry spokesperson Geng Shuang announced the visit on Sept 2.

"At present, the international situation is complicated and changeable, uncertain and unstable factors are rising amid trade frictions. Protectionism is intensifying, while economic globalization and the multilateral system are facing severe challenges," said an announcement from the Ministry of Finance.

Against this background, it is of great significance for China and Germany, as the major global economies, to jointly hold high-level dialogues in the financial field. The dialogues can also promote and strengthen communication and coordination of macroeconomic policies, as well as deepen practical financial cooperation between the two countries, according to the ministry.

In 2014, President Xi Jinping and German Chancellor Angela Merkel announced the establishment of a comprehensive strategic partnership between China and Germany. To implement the important consensus of the two leaders, a high-level financial dialogue mechanism was established between the two countries.

In January, Chinese Vice-Premier Liu He and German Vice-Chancellor and Minister of Finance Olaf Scholz successfully hosted the second dialogue in Beijing.

Over the past five years, the China-Germany High Level Financial Dialogue mechanism has played an important role in promoting cooperation between the two countries in macroeconomic policy, strategic cooperation, fiscal policy and financial regulation.

Under the dialogue mechanism, although China and Germany have differences in their views on global governance, strategic cooperation and financial regulation, the two sides did not fall into the trap of "conflict confrontation", but expanded cooperation on the basis of reciprocity and mutual benefit, always focusing on consensus rather than emphasizing conflicts, it said.

As of today, only three foreign banks have the "B-class" licenses of lead underwriters in China's interbank bond market. The German leader said during the previous bilateral dialogue that financial institutions from Germany are expected to receive this license.

"The two sides agreed that China will actively consider the application of German banks in accordance with relevant domestic procedures and standards," a senior official from the Ministry of Finance told China Daily.

"Even China cannot immediately meet Germany's demand at that time, our explanation has won the trust and understanding of Germany," he said.

China issued measures to further expand the opening up of the financial sector in July, allowing qualified foreign investment institutions to obtain the "A-class" licenses of lead underwriter, which can provide a broader service, and B-class licenses. "So the German demand is no longer a problem now, and the German institutions will receive more permission in the future," said the official.

Under the dialogue, since 2014, financial institutions from the two countries have maintained communication on the Belt and Road Initiative (BRI), third-party market cooperation and financing cooperation of small-and medium-sized enterprises (SMEs), the ministry said.

China and Germany are willing to strengthen cooperation under the framework of the Asian Infrastructure Investment Bank (AIIB) and explore opportunities for third-party market cooperation, according to the announcement.

The Export-Import Bank of China and Deutsche Bank will jointly provide services related to the BRI, and discuss the third-party market cooperation in the field of project financing and trade financing.

The China Development Bank has implemented the second phase of special loans for SMEs in China and Germany, and provided financing support to SMEs through cooperation with DG Bank AG.

By the end of the first half of this year, Germany's BMW held 75 percent of the shares of Brilliance Auto, becoming the first foreign automobile manufacturer with a majority stake in a joint venture in China.

German chemicals giant BASF is accelerating the building of a base in Guangdong province, with 100 percent shares and independent operation. The German Allianz (China) Insurance Holding Co Ltd will become the first newly established foreign insurance holding company in China.

"German enterprises have taken the lead in benefiting from China's new round of opening-up," said the ministry. "It has been proven by the facts that China and Germany have come to the forefront in bilateral financial cooperation. The commitments made by China in the dialogue are not confined to words, but to action."

In the first half of this year, Sino-German trade volume reached $90.64 billion, an increase of 3.2 percent compared with the same period last year. Investment from Germany in China grew by 70.7 percent year-on-year, and investment from China in Germany rose by 11.1 percent, according to the data provided by the Ministry of Finance.