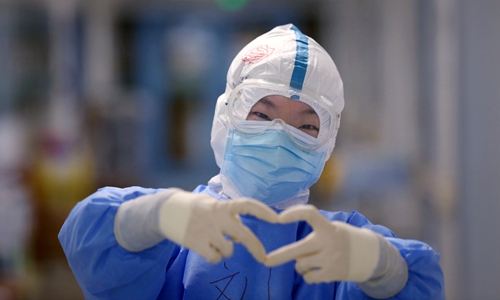 Northeast China's Heilongjiang Province health regulators on Saturday announced that no new confirmed or suspected cases of the COVID-19 infection had been reported in the province by Friday.
The news came after the provincial capital Harbin on Wednesday night rolled out stringent traffic controls, seen as the toughest in the region, in its four downtown districts, and shut down exits and entrances connecting the city with neighboring counties and townships, as well as banned flows of all vehicles and personnel.
Before the move, the confirmed cases of the COVID-19 infection in the four downtown districts had made up a quarter of the provincial total.
Heilongjiang provincial health commission circulated on Sunday that by end of Saturday, there were 480 confirmed cases, with 12 deaths and 72 critically sickened.
The large inflow of travelers, including those coming from epidemic-stricken areas, to Harbin, one of the most popular winter tourism hotspots in China, had led to the infection outbreak.
The city holds the International Ice and Snow Festival, a large-scale winter tourism program annually, which attracts millions of visitors from home and abroad.
Official data cited by the China News Service on Sunday shows that between December 1, 2019 and January 31, the city received some 70,000 visitors from Central China's Hubei Province, and the number of registered accommodations for these travelers amounted to 43,899, of which 10,450 were from Wuhan, the epicenter of the COVID-19 outbreak.
Among confirmed infection cases in Heilongjiang, six had been working in Wuhan, and nine were from Hubei.
The tradition of family reunions and new year visits over the Spring Festival period also added to the risks of transmitting the epidemic.
Data shows that 79.3 percent of patients with confirmed infection cases in Harbin resulted from a cluster transmission, reports said.
The region's cold climate also created difficulties for regular ventilation, making it more likely for the virus to be transmitted between family members and visitors.
On Sunday afternoon, Yang Baofeng, former president of the Harbin Medical University, expressed his gratitude to Zhong Nanshan, the central government's top medical advisor, by phone, for the latter's assistance in donating 50 hydrogen generators with nebulizers to the province.
The devices are effective in preventing patients' conditions from becoming more severe, Zhong said.
Zhong also noted that if COVID-19 patients have other complications such as cardiovascular diseases or diabetes, the risk of dying would increase drastically.
Moreover, patients with chronic obstructive diseases, which are common in the northern part of the country, especially the extremely cold northernmost part of the nation, could suffer from more serious symptoms and take longer to recover, he noted.
Zhong said he was not surprised by the situation of the epidemic situation Heilongjiang , and spoke highly of the honesty shown in the province's relevant report.