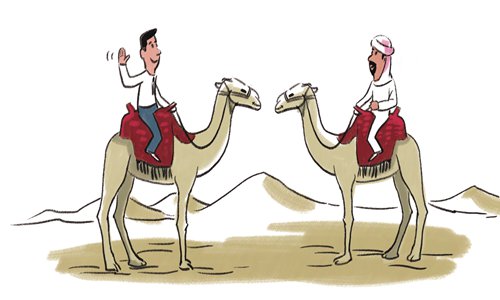 Sino-Arab relations have a long history. The Silk Road connected China and the Arab world in ancient times. In modern times, the two have always supported and helped each other in struggles for national liberation, independence and sovereignty. Arab countries have given China tremendous support on many important occasions and sensitive issues, including helping China to restore its lawful seat at the UN Security Council, Taiwan question and the Tibet issue. China has also stood by the Arab world on issues such as the establishment of an independent Palestinian state and economic development. In recent years, the two sides have strengthened strategic cooperation. Currently, China has signed an agreement on joint promotion of the Belt and Road initiative (BRI) with nine Arab countries. Jointly promoting the BRI has become the most distinctive feature of Sino-Arab cooperation. The construction of BRI has given birth to a new platform for developing China-Arab cooperation in the new era, adding impetus and creating new opportunities. Egypt's economic plan to revitalize its economy and the China-Egypt TEDA Suez Economic and Trade Cooperation Zone, the Silk City in Kuwait, the Dragon City in Dubai, UAE, and the China-Oman Industrial Park are all sign posts of the common development and prosperity between China and the Arab world. Saudi Arabia's Vision 2030, Jordan 2025 and other development strategies have all been linked to the BRI and have drawn a broad blueprint for long-term cooperation between China and Arab states.Since the establishment of the China-Arab Cooperation Forum in 2004, China and Arab states have increasingly come closer. In particular, since the 18th National Congress of the Communist Party of China, Sino-Arab exchange and strategic trust have deepened, which has played a major role in cementing the friendship. At the opening ceremony of the 6th Ministerial Meeting of the China-Arab States Cooperation Forum in 2014, President Xi Jinping proposed "1+2+3" cooperation pattern featuring one core (energy cooperation), two priority wings (infrastructure construction, trade and investment), and three high-tech sectors for breakthroughs (nuclear energy, space satellite and new energy), which has set the direction for China and Arab countries to strengthen pragmatic cooperation. The 8th Ministerial Meeting of the China-Arab States Cooperation Forum kicked off Tuesday in Beijing. Xi attended the opening ceremony and gave a speech promoting Sino-Arab cooperation.Of course, the two sides still face many challenges and difficulties in cooperation. First, the China threat theory still has a presence in the Arab world. Although the Arab countries are generally not surprised by the rise of China, a few are still worried that the country may become the "next America" in the Middle East for personal gain. Second, the industrial base of the Arab countries is very weak. Although the influx of "Made in China" goods has helped Arabs, it has also made some Arab elites fear that Chinese products may affect local industries. Third, Chinese companies and intellectual community still need to deepen their understanding of the Arab world, not only through the study of its history and religion, but also its politics.Problems arise with development, and can only be solved through common development and joint consultation. Sino-Arab friendship has endured the test of history. Guided by the Belt and Road initiative, the ancient silk road will once again usher in glory, and Sino-Arab relations will start a new chapter.