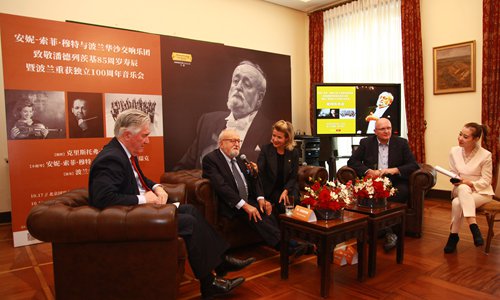 Maestro Krzysztof Penderecki answers questions at a news conference in the Polish Embassy in Beijing on Tuesday.( Photo: Courtesy of Tao Jing)

A world-class musical troupe landed in Beijing with a crescendo on Wednesday to appeal to the growing appetite of concert-goers in the city. The music group has a special mission: to promote Polish culture among the Chinese public and facilitate cultural exchanges between China and the European nation.

The concert, which presented the works of Maestro Krzysztof Penderecki, a reputed Treasure of Poland musician, is being organized with the participation of violinist Anne-Sophie Mutter and the Sinfonia Varsovia. After their first stop in Beijing, the musicians are scheduled to tour five other Chinese cities this month.

Wojciech Zajaczkowski, Ambassador Extraordinary and Plenipotentiary of Poland to China, told media at a news conference on Tuesday that the six concerts mark the 100th anniversary of Poland's independence, as they want to convey this joy to Chinese audiences through great music.

Jan Jerzy Malicki, director of the Cultural Service of the Polish Embassy, told the Global Times that in addition to the concerts, the Polish Embassy has lined up a mélange of cultural activities to ­celebrate the 100th anniversary of Poland's independence, including the "Poland Week" in Harbin, Heilongjiang Province, in April and the upcoming "Polish Cultural Week" in Beijing in November. He hopes such activities could inspire Chinese people to dig out the history of Poland.

The modern history of Poland is filled with repression and resistance. From being divided by neighboring powers three times to officially regaining its independence in 1918 and then surviving the World War II, the Polish nation is known to have an unyielding spirit. The White Eagle, sometimes described as an "unbroken eagle," is a symbol of Poland.

Cui Hongjian, director of the China Institute of International Studies' Department of European Studies, told the Global Times these cultural activities show that bilateral relations between China and Poland have been developing steadily and the mechanisms of cultural exchanges and channels have expanded. "Polish culture has a good cultural cognition basis in China. The visibility of Chopin, Madame Curie and Copernicus is high," he said. "Also, both countries pay attention to the importance and persistence of people-to-people exchanges."

Wray ­Armstrong, the founder and ­chairman of Armstrong International Music & Arts Enterprises Ltd, which is organizing the concert tour this time, told the Global Times that Polish classical music is warmly received by Chinese audiences, especially by children who are trained to appreciate this type of music.

Armstrong said his company has been dedicated to bringing in the best cultural products to China in the past decade, among which Polish products occupy about 8 to 10 percent.

He told Global Times that tickets to the concerts "sold very well," and there is a distinct change among Chinese audiences over the past decade.

Ten years ago only 50 percent of tickets were sold out. But now Chinese audiences have changed completely and they are aware of what's going on, and are much more open to all kinds of modern and traditional music, he said.

According to Malicki, an increasing number of Chinese audiences have also developed enormous interest in Polish theater in recent years and drama experts of the two countries communicate and cooperate frequently.

Malicki was hopeful of more cultural ­products including children's picture books and Polish games reaching Chinese people in the future.

He told Global Times that Chinese culture is quite popular in Poland.

Exhibitions on ancient Chinese culture and visual arts, Chinese drama and dance were organized in Poland, he said. "Traditional Chinese culture like tea art, calligraphy and kung fu are also popular. So is Chinese food."

Xinhua News Agency reported that between the 19th and 20th centuries, a large community of Poles once lived in the northeast of China, particularly in the city of Harbin.

Despite improvement in ties, setbacks persist. Cui said that language barriers hamper communication between both sides. "Also, compared with other European countries, the visibility of Poland is still low and the image of China in Poland also needs to be elevated. So far, cultural exchanges between the two countries are mainly pushed by the government. Spontaneous non-governmental exchanges need to be fostered," he said.

Malicki told Global Times that the frequent cultural exchanges between Poland and China in recent years have deepened friendship among people of the two countries.

Marek Suski, Vice-President of Polish-Chinese Parliamentary Group, said in a Xinhua News report that Chinese culture has a vast and rich history, and the cultural exchanges between the two countries in recent years have been abundant and diverse.

He expressed the hope that following the implementation of the Belt and Road initiative, such events might contribute to promoting economic and trade cooperation between Poland and China.

Ties between China and Poland have increasingly deepened in the past few years. The two countries established a strategic partnership in 2011.

Ties were reinforced in 2012 by then Chinese premier Wen Jiabao's visit to Poland when the 16+1 format - annual leaders' summit of China and CEE countries - became institutionalized. Recent years have also seen high-level visits between the two countries intensify.

Poland also applied to join the China-initiated Asian Infrastructure Investment Bank (AIIB) as a co-founding member in 2015, making it the first AIIB co-founder out of the CEE countries.

Cui said that the 16+1 format and Belt and Road initiative provide huge opportunities for cultural exchanges between China and Poland. Communications in other fields including tourism stimulate demand for people-to-people exchanges.