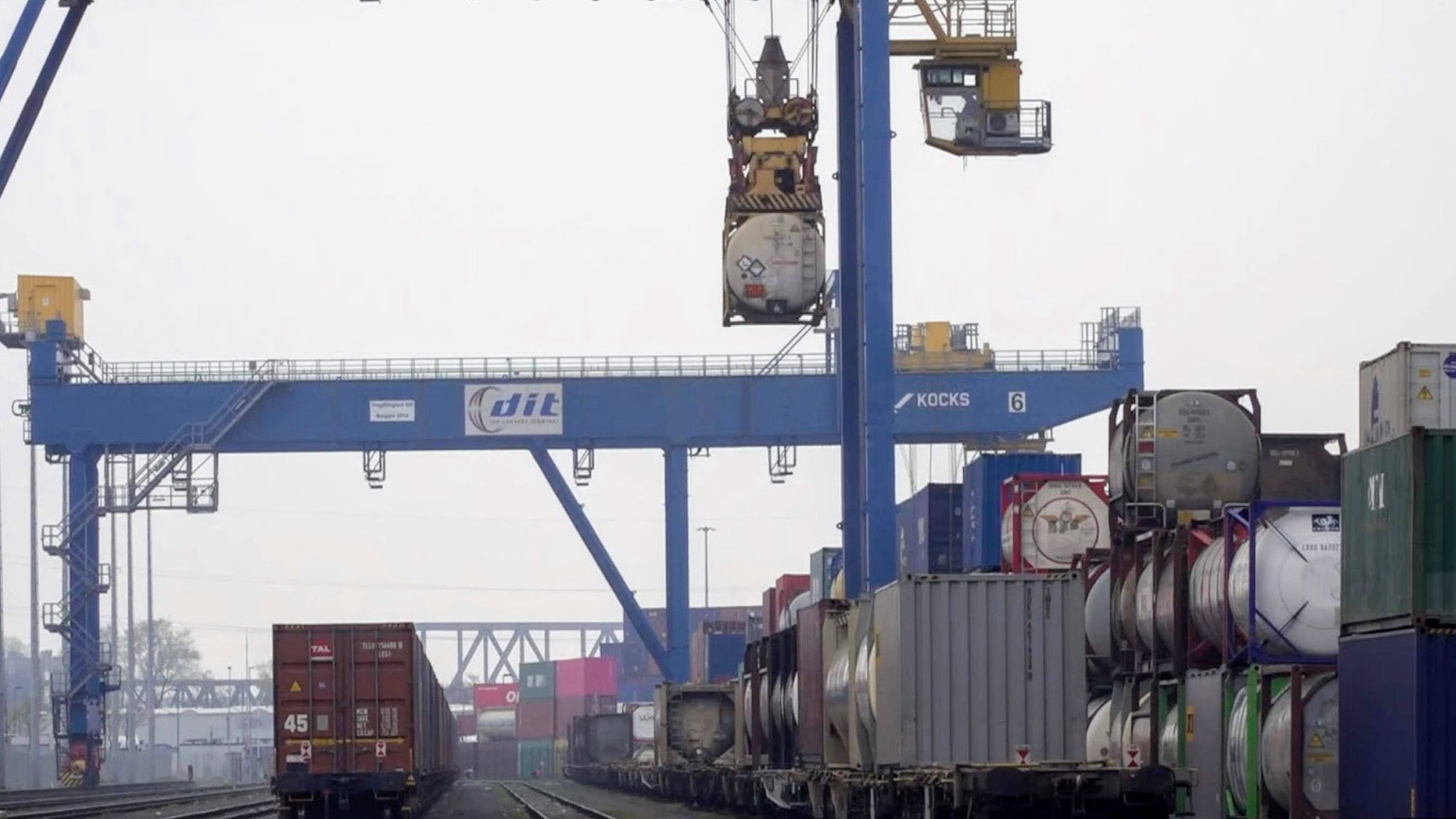 "We are short of truck drivers! The whole country needs more drivers," Durakovic told Xinhua while overseeing a training course.

The booming logistics industry in the city, driven up by the Silk and Road construction, brings Durakovic real business.

"Duisburg is a logistics center. The new Silk Road is definitely a reason for the growth of logistics," he said.

Located in the Ruhr industrial area, Duisburg is the world's largest inland port and a hub for transportation in west Europe. As the city has become a key terminal of the freight trains from and to China, changes are taking place.

The freight volume involving China accounts for nearly one third of the total in DIT, which has had to hire more drivers and workers to handle the containers and build more warehouses.

Near the Duisburg Port, the German national railway company Deutsche Bahn (DB) is building another freight terminal to be put in operation this year. Nicole Brandenburg, a staff there, told Xinhua that the shipment volume in Duisburg will further increase as she expected more trains from or to China.

Duisburg Port is expanding. A deserted paper mill has been converted into new port facilities and the new container dock near the Rhein River has increased the capacity of the whole port.

Through those changes, Durakovic found opportunities for his company: he will train as many as 1,000 truck drivers per year in the future instead of 400 at present.

The freight trains, named China Railway Express, is a key project under the Belt and Road Initiative proposed by China. With an average journey time of two weeks, cargo trains between Europe and China are faster than container ships and cheaper than cargo planes.

The project's contribution to the local industry is visible, with the Railway Transportation Service Broker (RTSB) as a case. The company previously focused on transportation between West Europe and former Soviet Union states till 2013 when it operated the first train from central China's Zhengzhou to German city of Hamburg.

As the route succeeded and attracted more customers, RTSB operated more freight trains between Duisburg and Hamburg and Chinese cities like Chengdu, Chongqing, Hefei and Changsha.

In the past three years, the turnover of the company tripled to 300 million U.S. dollars, and the freight volume doubled in 2018 from a year ago.

"It's all because of the China Railway Express. It has become the focus of our company," said Kateryna Negrieieva, business development director of RTSB, adding that more jobs are created in other parts of Europe as a result of increased cargo flows on the routes. In the Polish city Malaszewicze bordering Belarus, RTSB's office expanded from five staff members in 2016 to 30 at present.

Johannes Pflug, a former German parliament member and now Duisburg's China representative, told Xinhua that the China Railway Express in Duisburg has increased from three trains per week to 35 to 40 per week right now, stimulating the growth of port industry and creating over 6,000 jobs.

Yu Kai, China business development manager at the Economic Promotion Agency of Duisburg, told Xinhua that Chinese companies registered in Duisburg have increased from about 40 in 2014 to over 100 now.

Duisburg has also attracted investors in neighboring countries. Yu said the agency is promoting a project in Rheinhausen area on the west bank of Rhein, which used to be an administrative center of the steelmaker Thyssen.

The plot and building have been bought by an investor from the Netherlands, who believed that more Chinese companies will come here after the complex is converted to office facilities. Although the renovation has not yet finished, over 10 Chinese companies have already registered here.

Many parts of Duisburg are under construction. Besides the port and the DB terminal, a business center is being built on the square in front of the main railway station. Roads are being built or expanded. In the city's southern suburbs many urban facilities have been planned.

But in the north, a large landscape park reminds the people of the rise and fall of the city. The iron and steel work of Thyssen built at the dawn of the 20th century was converted to a park about 90 years later after it was deserted. The factory's facilities still stand there, abandoned, rusty and overgrown with weeds.

Markus Taube, a professor at East Asian economic studies at the University of Duisburg-Essen, told Xinhua that Duisburg had experienced 20 dire years of stagnation, as the old heavy industry had gone for quite a long time and the business model did not work anymore.

The city's population has shrunk from 600,000 in the 1970s to around 500,000 right now. Its unemployment rate was among the highest in Germany after all of the coal mines and many large steelworks were closed.

"Until five or six years ago, Duisburg found logistics as a new engine. It is catching up and regaining strength, and luckily the Belt and Road is really stimulating the city, which is becoming a logistics center," said the life-long Duisburger Taube.

"We used to be a city of iron, steel and coal...We are now a gateway for China to enter Europe," said Mosblech.