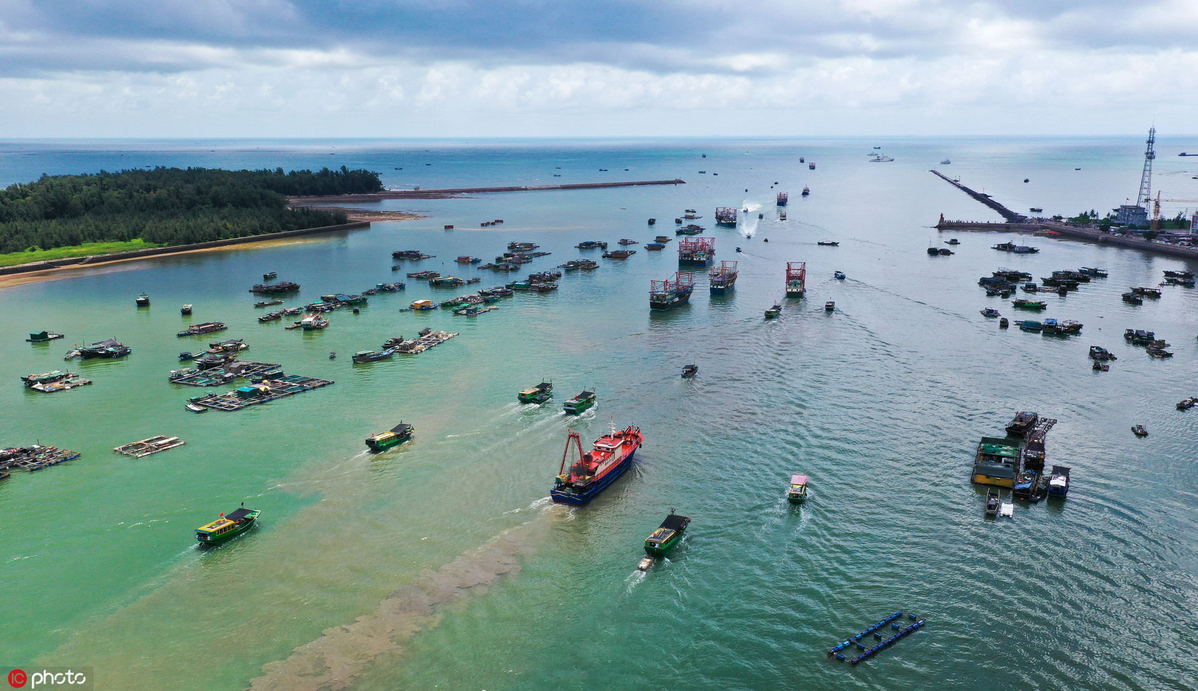 NANNING - Southern China's Guangxi Zhuang autonomous region has seen its coastal industries enter the fast lane of development thanks to a new trade corridor connecting western China and other countries and regions with land-sea intermodal transport.

The cities on the shoreline of Guangxi's Beibu Gulf, including Fangchenggang, Qinzhou and Beihai, have become hot spots for investment as the cities' ports now serve as an important transit in the rail-sea freight routes under the New International Land-Sea Trade Corridor, a trade and logistics passage jointly launched by western Chinese provincial regions and Singapore.

In the port area of Fangchenggang, construction is underway on a 1,267-hectare iron and steel production base with a designed annual production capacity of 9.2 million metric tons.

The base, owned by Guangxi Liuzhou Iron and Steel Group, is scheduled to begin operating by the end of this year.

Its products, including high-strength seismic-resistant steel and hot-rolled steel plates, will be mainly sold across southern and southwest China and exported to Southeast Asia, said Li Meiliang, who is in charge of the construction project.

So far, the company has built an iron ore wharf with a handling capacity of 200,000 tons and a railway line to transport imported iron ores directly from the wharf to the base.

"The imported materials can be transported by sea to arrive at our factories, which will greatly reduce our shipping costs," Li said, adding that his company has benefited from the new corridor.

Launched in 2017, the corridor has been gaining steam as its rail-sea routes offer a faster and cheaper freight transport option between western China and other countries and regions.

The ports in Beibu Gulf now operate shipping routes for 250 ports in over 100 countries and regions, and low logistics costs have become the gulf coastal industries' greatest strength.

Zhang Yong, assistant to the general manager of the Fangchenggang-based Guangxi Jinchuan Nonferrous Metals Co, said logistics costs used to be the bottleneck for their parent company based in Gansu, an inland province in western China, but the costs have been slashed since the Fangchenggang subsidiary was set up.

It now costs less and takes less time to import raw materials from Africa and South America and to export the company's products such as cathode copper and sulfuric acid to countries including India and Vietnam.

In Qinzhou, another port city in the Beibu Gulf, Guangxi Huayi Energy Chemical Co has invested about 70 billion yuan ($10.2 billion) to build a large petrochemical production base.

Tang Weichun, the project's deputy director, said his company located its base in Qinzhou due to its convenient logistics and well-developed petrochemical industry.

"The chemical products produced in Qinzhou can be easily shipped to our major markets in southern China and Southeast Asia," Tang said.

Wei Ran, deputy director of the office for the planning and construction of Beibu Gulf economic zone, said the new corridor has become a new engine for the opening-up efforts of the cities in the gulf.