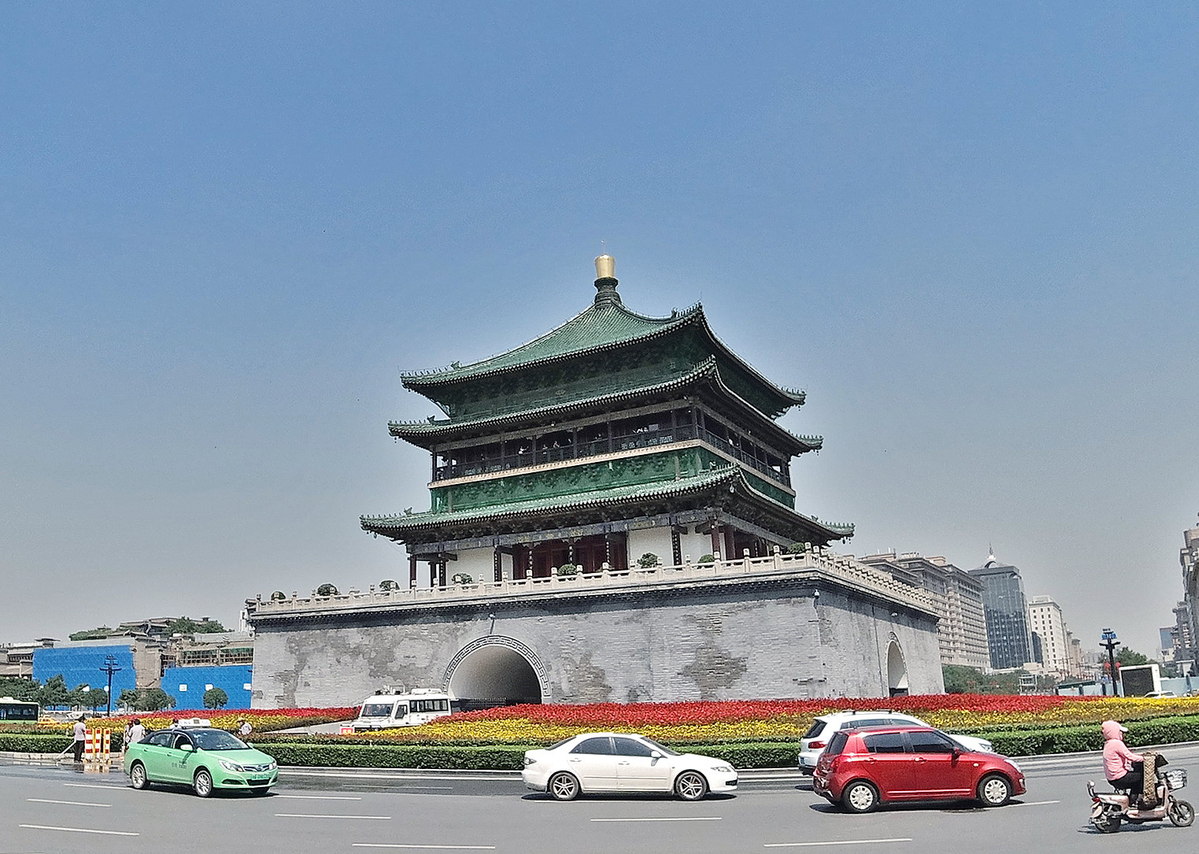 The newly renovated Xi'an Bell Tower opens to the public on Wednesday. The tower, with a history of 600 years, underwent renovation for more than 70 days due to long-term weathering. ZHANG JIE/FOR CHINA DAILY

A landmark bell tower with a history of over 600 years in the center of Xi'an, capital of Shaanxi province, reopened to tourists on Wednesday after more than 70 days of maintenance work on its roof and rafters was completed.

The Bell Tower, built in 1384 during the Ming Dynasty (1368-1644), is a 36-meter wood-and-brick structure known as one of the largest and best-preserved bell tower in China.

To prolong the life of the tower, the Museum of Xi'an Bell and Drum Towers began to repair the roof and outer golden columns on June 12.

Wang Lei, director of the museum, said due to long-term exposure of wind, rain and sunshine, the tower roof suffered from rain leakage and partial peeling of its ornaments.

"The most difficult part of the renovation was gilding the roof," he said. "We used 3,800 pieces of gold foil, weighing about 70 grams, to renovate the roof, which was being restored for the first time in 25 years.

The roof has four layers, with the innermost a wooden core wrapped up in a copper sheet. The copper skin is scraped with putty covered with gold foil.

Workers needed to climb stairs for the repair, since the roof is about 4.53 meters high, Wang said.

The restoration work was the sixth made to the tower since 1949, and the last overhaul was in 2011, according to the museum.

Local residents and tourists from home and abroad applauded the reopening of the ancient tower.

"I was looking forward to the reopening," said Zhang Zhen, a native of Xi'an who works near the tower. "Even if you just take a look outside during the day, you will feel very familiar and close to the building because it's a landmark in my hometown."

Cheng Beiyi, a 12-year-old student, said after visiting the tower she felt the ancient people were full of wisdom.

"Many modern buildings need electricity and technologies to be maintained, but the Bell Tower is still standing after more than 600 years without much technology involved," she said.

Adrie van den Berk, a project manager at a gas shipping company in Shanghai, took a tour of the tower with his wife on Wednesday afternoon.

"We just saw the tower by accident when we had a bicycle tour in the city today," he said. "I was amazed by the structure of the building and was lucky to see its whole appearance."

By noon on Wednesday, more than 1,000 tourists had visited the Bell Tower, twice the number of tourists that had visited on the mornings before the repair, according to the museum staff.

The museum has also decided to extend the bell tower's opening time by one hour every night before Oct 10 to give tourists more sightseeing time.