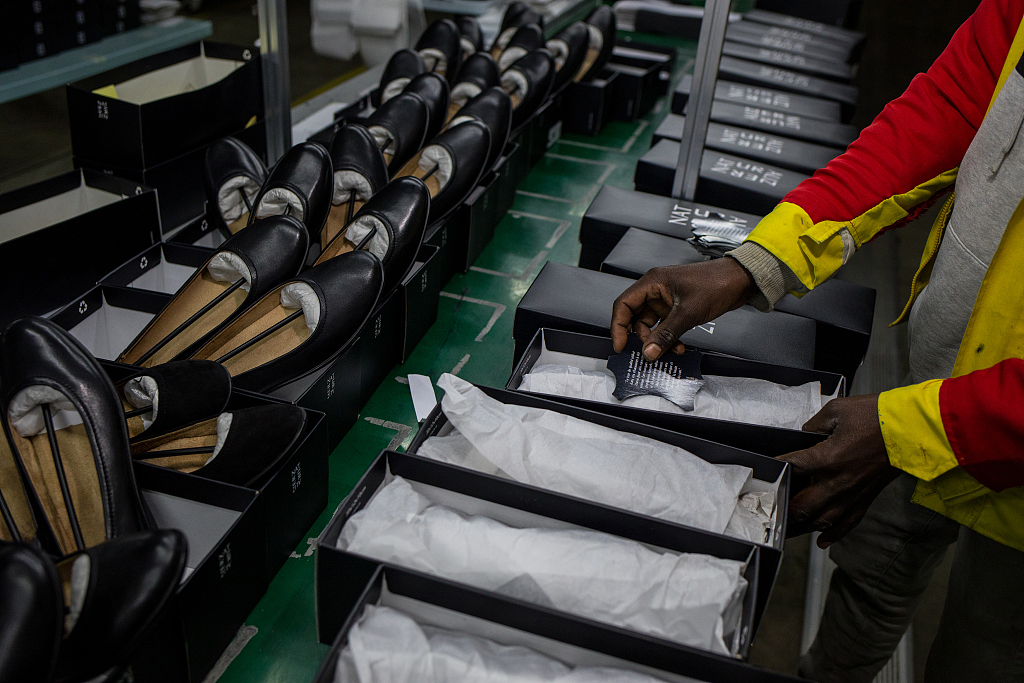 HAWASSA, Ethiopia, Aug. 29 (Xinhua) -- As Ethiopia envisages to become the manufacturing hub of Africa within the coming decade, Chinese-built industrial parks in different parts of the country are now luring world-class investors.

Fitsum Ketema, General Manager of Hawassa Industrial Park, told Xinhua that all the available 52 factory sheds that are available inside the Hawassa Industrial Park have been transferred to 21 international companies, some of which are undertaking their activities inside the few vacant factory sheds to commence their manufacturing operations soon.

The Hawassa Industrial Park, which the Ethiopian government considers as its flagship industrial park in its ambition to transform the country as the manufacturing hub of the African continent by the year 2025, was built by Civil Engineering Construction Corporation (CCECC) and completed back in 2016 in just nine months of construction period.

Noting job creation as the industry park's major ambition, together with its aspiration to lure foreign direct investment (FDI) and technology transfer, Fitsum also emphasized the park's indirect economic imperatives to the Hawassa city and its surroundings.

According to the general manager, the industrial park has so far created 27,000 direct job opportunities to local youth. He also revealed ongoing works to further increase the number of job opportunities when all the 52 factory sheds commence their manufacturing operations soon.

The Hawassa Industrial Park, located some 275-km south of the capital Addis Ababa, is considered as Ethiopia's "flagship industrial park" with its state-of-the-art technologies that are installed inside the premises of the industry park.

"The Hawassa industrial park has become a model for other industrial parks under construction in Ethiopia and elsewhere in Africa, mainly due to its Zero-Liquid Discharge (ZLD) technology installed inside the industry park, which is also the largest in Africa," Fitsum said.

The ZLD technology currently treats 11-million-litter wastewater on a daily basis, and recovers the treated water for a recycle use, according to the park's general manager.

"Despite the industry park's only 9 months of the overall construction process, investors and policymakers often describe the park as world-class infrastructure," Fitsum said.

Chinese engagement in Ethiopia's industrial park development endeavor is also injecting the much-needed imputes in Ethiopia's momentum towards becoming a middle-income economy within the coming decade.

The Dire Dawa industrial park, which is also under construction by CCECC, is currently awaiting international investors from multiple sectors including heavy industries, textile and apparel, vehicles assembly and food processing, electronic, paper and allied products, chemicals, according to the Ethiopian Investment Commission (EIC) and the Chinese contractor.

Drawing from China's economic growth experience, Ethiopia will have about 15 industrial parks within the coming years, most of which were built by Chinese companies and with Chinese technologies.

The Ethiopian government often said the industrial parks that had been triumphant as they lure world-class companies including PVH - a company known for marketing diversified portfolio of brands including Calvin Klein and Tommy Hilfiger.

China Tiesiju Civil Engineering Group is also building the Kilinto pharmaceutical industrial park (KIP) at the outskirt of the capital, which is under construction with funding from the World Bank.

According to figures from the Ethiopia Investment Commission (EIC), Ethiopia has earned 142 million U.S. dollars in export value from Chinese built industrial parks during the Ethiopian fiscal year 2018/19, which ended on July 7. , up 50 percent as compared with the same period in the 2017/18 fiscal year.

According to Arayaselassie, the construction and commissioning of the Chinese-built Ethiopia-Djibouti standard gauge electrified railway in January last year has also contributed to boosting landlocked Ethiopia's export ambitions, by transporting speedily and efficiently cargo from industrial parks in mainland Ethiopia to ports in Djibouti.