BRI NEWS No country can prosper in isolation: Chinese ambassador to US

No country can prosper in isolation: Chinese ambassador to US 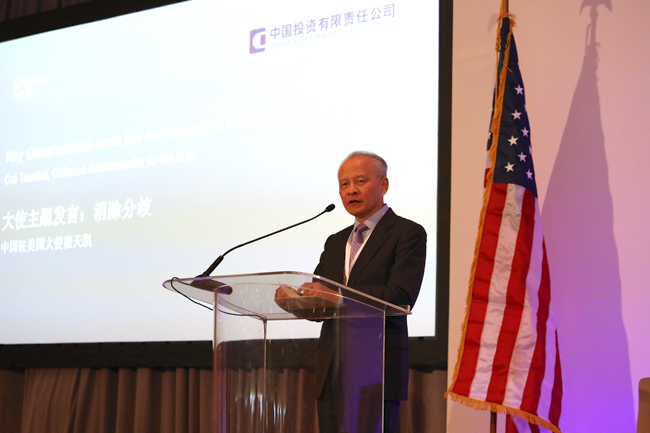 (Photo: Chinese Embassy in the US)

CHICAGO, April 20 (Xinhua)  -- No country can prosper in isolation or solve the global challenges all by itself, Chinese Ambassador to the United States Cui Tiankai said, in a reference to the rising protectionism in developed countries.

Speaking at the U.S.-China Business Summit hosted by China Investment Corporation and Goldman Sachs in Chicago on Wednesday, Cui said today's world is pretty much globalized and people have global opportunities as well as global challenges.

"No country can handle all this by itself. And no country can prosper in isolation," he said. "But now we see policies that attempt to close the door and resort to unilateralism."

The best choice is to take a win-win approach, he said.

"But now we see policies that are so strongly influenced by the zero-sum mentality as well as policies that regard other people's success as their losses," he said. "Perhaps they believe that by doing this, they could gain more. But I don't think such a mentality would be helpful to anyone."

On the possibility of a trade war between China and the United States, Cui said, "A trade war will only destroy trade itself. So such policies are not in line with the reality of the 21st century. They did not even solve the problems of yesterday, still less the problems of today and tomorrow."

The business community, he said, should give policymakers good advice so that they adopt good policies.

Remarking that the world has seen a clear and alarming rise of protectionism and economic nationalism in the developed world, Cui said the best way to bridge the divide is to enhance connectivity - not only in infrastructure, but also in cyberspace, trade, finance, policies and among people.

"In this regard, the Belt and Road Initiative is an excellent example. It was designed and initiated exactly for the purpose of enhancing connectivity throughout the world so that everybody could share the opportunity of development and remove the divide more effectively," he added.

The diplomat urged stronger participation by the business communities of both countries in the initiative for a win-win result.