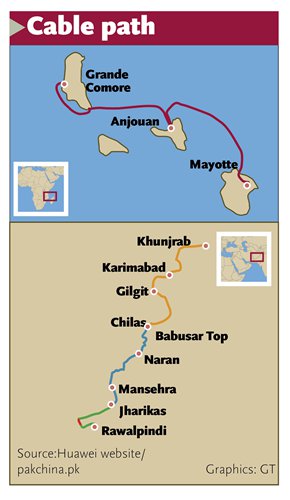 China's increasing number of cross-border optical fiber cable projects with Belt and Road countries, which have improved local communication infrastructure, have won praise from experts who said China's telecommunication technologies are on a par with Western countries.

Experts also dismissed criticism that the Chinese government is using those projects for espionage.

The first land-based China-Pakistan optical fiber cable, constructed by Chinese technology giant Huawei, was inaugurated Friday, and is expected to be officially put into commercial use this year, the Xinhua News Agency reported Saturday.

The project's cable runs 820 kilometers from Rawalpindi near Islamabad in the south to the Hongqi Lahu port on the border between China and Pakistan.

Huawei is also involved in at least 10 submarine cable projects in African countries, according to its website.

China Mobile has been pushing its cross-border fiber cable projects linking China to Myanmar, Nepal, Pakistan and Kyrgyzstan since 2017, the Beijing Morning Post reported in March.

Eight of China Mobile's optical fiber projects in Central Asia, South Asia, and Southeast Asia were completed by 2017. These include fiber cables between China and Kazakhstan, China and India, China and Vietnam, the news site china.com reported.

Western media have called those projects "intelligence gathering networks," suggesting that Chinese companies will insert some backdoor mechanism to engage in electronic surveillance or exert some sort of pressure on other countries.

Australia last week signed deals for submarine cable projects with Papua New Guinea and the Solomon Islands, which were aimed at shutting out Huawei, the Australian Tribune reported, suggesting there are concerns on security and on China's "control" over the South Pacific region.

Huawei did not respond to questions on the report as of press time Sunday.

"China's cable industry and technology have developed rapidly in recent years with strong competitiveness in the international market, and China is now on a par with western countries in terms of its telecommunication technology," Zhao Gancheng, director of the Center for Asia-Pacific Studies at the Shanghai Institute for International Studies, told the Global Times.

"Cable projects are now among the most popular projects in cooperation with Belt and Road countries, as they actually improve living standard and spur development of advanced technology," Zhao said.

Many people in Western countries believe all Chinese companies have political motives, which is part of the so-called "China threat" theory they have been hyping for years, said Liu Weidong, a research fellow at the Chinese Academy of Social Sciences.

He also said that Belt and Road countries will not buy the delusional Western hype, as they realize that pragmatic economic interests outweigh political propaganda, and China has provided local people with job opportunities and convenience.

Countries that attempt to elbow out Chinese companies in international markets and obstruct China's Belt and Road initiatives may sour relations with China and those countries, and may suffer severe economic losses, experts warned.