North Africa should look beyond differences to embrace BRI 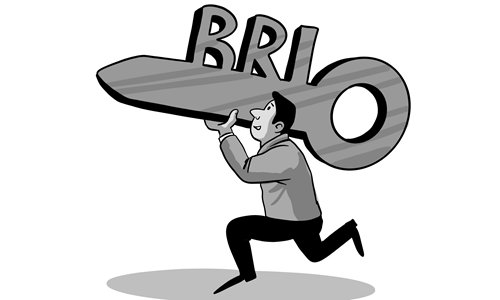 North Africa should be considered as the next natural stage in the development of the Belt and Road Initiative (BRI).
The geopolitical and economic potential of the region, which stretches from Morocco to Egypt, represents a real opportunity for China to support its industrial transition by building modern infrastructure, linking its economy to the rest of Africa, the Middle East and strengthening its added value proposition to the EU.
North Africa with its promising economies and a population of some 200 million, represents a unique economic platform for global investment and trade.
To rely on a more sustainable economic output, North Africa policymakers have made decisions that reflect a new mindset which projects the region to become a hub for multinationals to establish operations. These include Egypt's New Suez Canal project, Morocco's Tangier Free Trade Zone as well as the country's Noor solar power complex, and opening up the local market to foreign investment as Tunisia is doing.
One key element in all these projects is the participation of Chinese companies, either directly or with partnerships with local and international players.
While North African nations have always cultivated a close partnership with China in many fields, ranging from health missions, construction projects, telecommunication and trade, a new model is shaping the nature of economic collaboration between North Africa and China - the BRI.
All North African nations are part of the project, and policymakers from the countries did not hesitate to sign memorandums of understanding (MOU) to ensure the region profits from the BRI project.
They have seen that BRI infrastructure projects in Africa have accomplished what European efforts failed to do: create new industrial hubs and transportation networks. Seeing this impact, in July, North African countries decided, together with China, to take the necessary steps to integrate the national MOUs already in place into a larger project that will reflect the next stage of the initiative: the signing of cooperation agreements with 18 Middle Eastern and North African countries to jointly develop the BRI.
This new phase of the BRI initiative will be a milestone for Africa, if policymakers can see past their differences to unify their shattered economic blocs under one project.
China is offering to build information superhighways and introduce the next phase of communication development through 5G networks. There is the possibility of linking the North African corridor with proven railway technology and services, as it did in Kenya and in other nations, and to support North African nations to make the successful transition to renewable energy through solar and wind technologies.
North African policymakers cannot expect investors to build industries in the region if there is no 21st century infrastructure: fast communication networks, labor trained in fifth generation industry, lower energy costs, and a strong regional market able to access the world.
The nations' governments are concerned about employment opportunities for their growing young population as, while economic factors show promising growth, unemployment risks destabilizing all the macroeconomic success.
The solution lies in thinking at a microeconomic level, and in real trade, entrepreneurship development and e-commerce. Engaging with China through the BRI is a solution for North African states to support their national economic agendas and create social stability through trading in the real economy, opening the market and have goods transit easily between the 200 million population, access e-platforms such as Alibaba's Tmall to sell globally, and integrate proven and secure worldwide e-payment solutions such as Alipay and WeChat Pay.
Having said that, many challenges can interfere with the full implementation of the BRI vision as a viable alternative for North Africa.
The first is the colonial past, as regional policymakers have a hard time seeing past Europe and the dramatic shifts in the global economy.
Sure, the EU has a solid economy, structure, and political weight, but today African nations have an alternative, the emerging markets in South Asia and China.
Second is the political diversity between the regimes who are unable to lay old conflicts to rest to understand that their unique strengths complement each other.
Last, security risks, including the Libyan conflict coupled with Egypt's Sinai insurgency, are blocking the full potential of a North African corridor.
We can say today with certainty that North Africa is making the right decision in embracing the BRI and China stands ready to offer proven technologies, finance and market access.
Questions remain. Are the North African nations ready to absorb the opportunity at hand? Can they work with China to build a shared economic vision through the region? Are North African policymakers ready to turn East?
The July 2019 agreement certainly paved the way to formally recognize the BRI as a vital project for the region. Now let's see how this intent transfers to real projects benefiting the real economy and trade.