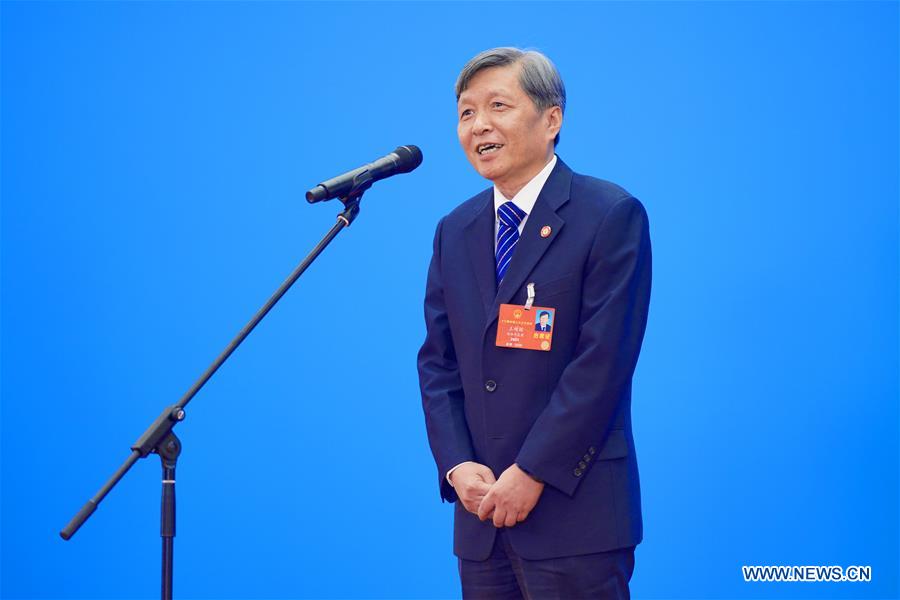 Wang Shuguo, a deputy to the 13th National People's Congress (NPC), gives an interview via video link before the second plenary meeting of the third session of the 13th NPC at the Great Hall of the People in Beijing, capital of China, May 25, 2020. [Photo/Xinhua]

A number of well-known academic institutes have set up branch offices and joint international laboratories in the Western China Science And Technology Innovation Harbor since the area was established in Shaanxi province two years ago, a national legislator said on Monday.

In light of rapidly advancing science and technology in the world, people working in every discipline should ask themselves what changes have happened to their disciplines since the beginning of the fourth industrial revolution and whether their work ranks among the world's top five in the discipline, Wang Shuguo, a deputy to the 13th National People's Congress, said in an interview before the second plenary meeting of the third session of the 13th NPC at the Great Hall of the People in Beijing.

The harbor, a national program initiated by the Ministry of Education and the government of Shaanxi province, is an important platform from which the government and Xi'an Jiaotong University can implement China's national strategies.

Wang, who is also president of Xi'an Jiaotong University, which led the harbor, said the staff members should also ask themselves whether their work in the discipline has met the country's needs and helped solve key problems, what place they hold in the industry they serve and whether there are any Chinese enterprises in the world's top five.

He added that asking these questions has provided a driving force for teachers and students at the university to work harder. Some science and technology experimental classes have been set up jointly by the university and some leading enterprises have laid a solid foundation for the students' future.