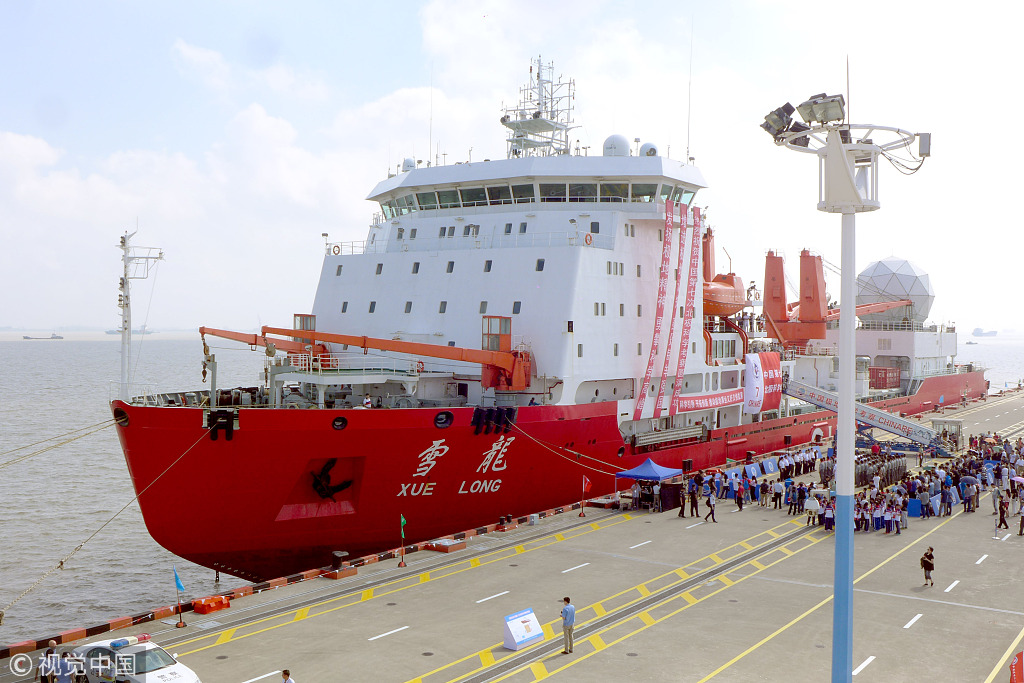 The Chinese icebreaker Xuelong returned from the Arctic for the 7th time on Sep 26, 2016. [Photo/VCG]

The Chinese icebreaker Xuelong will set out for northern seas on Friday to continue its research of the Arctic Ocean's environment, ocean circulation patterns and natural resources.

For the first time, it will search for new environmental pollutants. Measuring ocean acidification and the spread of microplastics will continue to be major parts of the expedition this year－a planned 22,800-km voyage－after they were studied for the first time last year, scientists said during a media briefing on Thursday.

Ocean acidification is internationally acknowledged as worsening in the Arctic, mainly as a result of rising carbon dioxide emissions. Also, microplastics may trigger environmental disasters, such as the bleaching of coral reefs, and affect marine biodiversity, the scientists said.

"We achieved world-class research results last year in those two aspects and will continue to make efforts this time to address regional and global environmental issues," said Xia Limin, deputy head of the Chinese Arctic and Antarctic Administration.

The situation in the Arctic Ocean is undoubtedly better than that of the oceans adjacent to continents with dense populations, but it will deteriorate with global warming and the decrease of sea ice, the researchers said.

Marine microplastics are tiny pieces of plastic often used in such things as facial cleansers that pass through wastewater treatment plants and reach the ocean. Environmental experts said microplastics have been discovered in zooplankton and can eventually find their way to human stomachs if consumed by fish and other creatures higher up the food chain.

Environmental research, including the distribution of zooplankton in the Arctic, sedimentation of organic carbon and marine microorganisms and their gene resources, will be another key issue for the 131-member expedition team before it returns in September.

"The Arctic Ocean is an important marine channel for the Belt and Road Initiative, and the country has put forward green Belt and Road construction. Such observations and research will help provide higher-level scientific support for collective ecological protection," said Wei Zexun, chief scientist of the expedition team.

Studies on the interaction of sea, ice, air and ocean circulation－which all play a role in affecting the global climate system and its variations－will continue to be undertaken by the expedition with the ultimate goal of responding to climate change, Wei said.

"The ecosystem in the Arctic region is closely related to disastrous blizzards and sleet in China. So such studies will also be meaningful for the country's marine disaster prevention," he said.