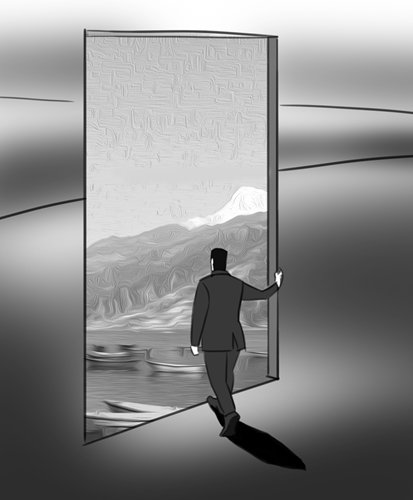 Four hours after driving from Kathmandu along the China-Nepal Highway, you reach Kodari, a crossing from Himalayan nation Nepal into China's Tibet Autonomous Region.

For more than 50 years after the highway was built, it has been the most important and the only road between China and Nepal. The goods passing through this road make up about 80 percent of the total land trade between the two countries, and 90 percent of Tibet's commerce with Nepal.

Kathmandu stands in a valley flanked by hills on three sides, about 1,400 meters above sea level. Driving on the winding road northward up to Kodari, the altitude increases another 1,000 meters.

Looking at the Chinese side from close to the Sino-Nepal Friendship Bridge gives you the feeling of being at the foot of a huge mountain while Zhangmu, a border town of China, stares from the hillside. Crossing over the mountain and going up, you arrive at Shigatse in China, which stands at 3,800 meters. The China-Nepal border is surrounded by mountains that are tall even by global standards.

For a long time the Himalayas have acted as a massive wall that cut off China from South Asia. Even Buddhism was introduced in China via the sea route and through Central Asia.

Since adopting a closed-door policy during the Ming Dynasty, China did not even think about exploring across the Himalayas. Such a geographical barrier is more solid and insurmountable than the Great Wall.

After British colonists invaded South Asia, they attempted to cross the barrier to enter China, but failed. Nepalese  troops invaded Tibet in 1855, but were defeated and kept out.

Chinese leader Deng Xiaoping said 40 years ago when he adopted the reform and opening-up policy that China had been through hundreds of years of self-isolation and became impoverished, backward and benighted.

But today's China has taken on a completely new look. It not only has the need to overcome the barrier, but the strength, courage and wisdom to do it.

I traveled to Tibet twice. In the recent decade, the region has undergone dramatic changes. The housing price in Lhasa has risen to about 10,000 yuan ($1,565) per square meter.

This is an embodiment of China's rise as the world's second largest economy. It will have spillover effects and push the country to rethink relations with neighbors.

The Belt and Road initiative is inevitably historical. After all, it is just a matter of time that China's influence goes beyond the Himalayas to reach South Asia.

There used to be the southern route of the Silk Road, entering China through the Nathu La Pass. But the Belt and Road initiative differs from it. It is more a pathway for China to go outside with its developmental achievements and willingness to share its success than a route for the outside world to get into China.

Unlike the British colonists, the Chinese who go to South Asian countries are not seen to carry guns or opium, but a plan for common development and sincerity in their heart for cooperation.

More routes will open and more links be established over roads and railways between China and South Asia. More Nepalese, Indians and Bangladeshis will be able to visit China while more Chinese invest in South Asia.

When the Himalayas are no longer a thick and strong wall, what will once the most underdeveloped region look like?