Pakistan is a major producer of the world's best and most popular mangoes, ranking the 4th largest in the world with an annual output of around 1.8 million tons. The sweet and juicy mangoes earn its reputation in European and Gulf countries and serves as a main pillar of Pakistan's fruit exports. 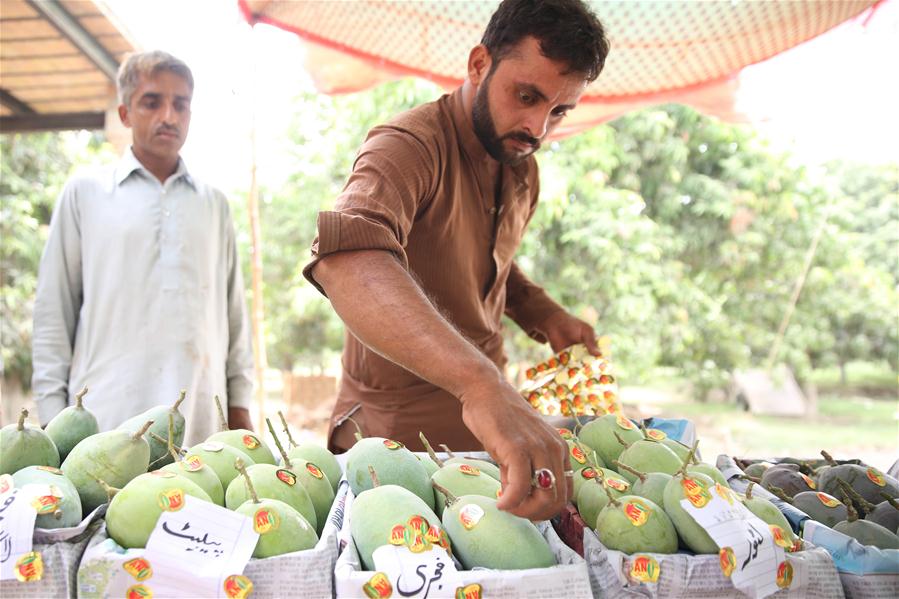 A worker labels mangoes at an orchard in Vehari in Pakistan's Punjab province on July 15, 2019. (Photo: Xinhua)

Mango is widely cultivating in the country's eastern Punjab and southern Sindh province. However, with a huge amount of production and multiple exporting destinations, Pakistani mango's share in the global export market is only 7.6 percent, according to an official from the country's Ministry of Commerce.

"Pakistan exports less than 6 percent of its total production to 57 countries, including Britain, the United States, China, Japan, United Arab Emirates, Canada, Saudi Arabia and Iran," said the official, believing that the production and exports are not up to the mark.

The official said Pakistan's export potential is much more than the current but the country is unable to increase it due to incapability like poor processing, old cultivation and harvesting methods, lack of required facilities to meet international protocol, low per-hectare yield and higher cost.

"Power projects under the China-Pakistan Economic Corridor (CPEC) have cut electricity load shedding by 70 percent in the rural areas, which is helping us to tube wells for orchard irrigation. Water is life for fruit trees. In the past, a number of mango trees withered due to a shortage of water, but now, availability of ample power from CPEC projects is helping us provide required water to our trees, which has increased their life and boosted production," said Khakwani.

Khakwani, whose farmhouse is famous for producing top varieties of mango, including Chaunsa, Langra, Red King, Fajri, Dussehri and Anwar Ratol, also has plans to export his tasty and pulpy summer fruit to more countries, including China.

Muhammad Ashraf, another mango farmer whose business has a big push from the improved road infrastructure under CPEC.

In the past, Ashraf had to sell the majority of his production at local or neighboring markets at cheap rates owing to the absence of a proper road network leading to big cities. Now the new road infrastructure is helping him sell his mangoes on good prices to big cities like provincial capital Lahore and the country's capital Islamabad.

The farmer told Xinhua recently that CPEC's top-class road infrastructure has shortened distances and cut traveling time by half, which has revolutionized the local transport system and facilitated his mango supply to other areas.

"CPEC has brought big changes in Pakistan by spreading a vast road network linking south with the north. In the past, it took us a long time to reach big cities and sometimes trucks got turned turtle due to poor roads, but now transportation has become very easy," said Ashraf.

By reaching big cities' markets, the mango growers' incomes have also increased by 50 to 70 percent. They sell a basket with up to eight kilogram mangoes for 550 rupees (3.5 U.S. dollars) at the local market but now they can sell the same basket in big cities for 900 rupees.

Ashraf who is already in cooperation with a Chinese company for hybrid seeds of watermelon and different vegetables said Pakistani mango producers extremely need latest agriculture technology to increase mango production, improve quality and supply to the international market.

Earlier in July, Pakistan's Minister for Planning and Development and Reform Khusro Bukhtiar said the government is focusing on developing the agriculture sector on modern lines and for this China has agreed under CPEC for technology transfer, training, irrigation development, capacity building and provision of modern machinery.

Chief of the All Pakistan Fruit and Vegetable Exporters, Importers and Merchants Association Waheed Ahmed told Xinhua that Pakistan has set a target of 100,000 tons of mango export this year to earn 80 million U.S. dollars.