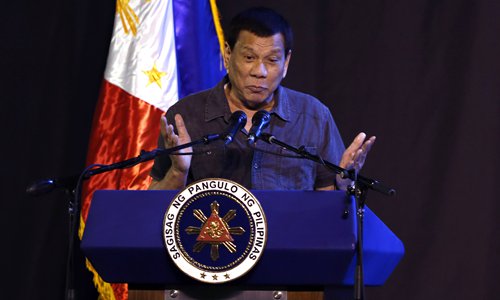 Philippine President Rodrigo Duterte will embark on his visit to China Wednesday. After attending the Second Belt and RoadForum for International Cooperation in Beijing in April, Duterte decided to visit China for the second time this year in less than five months, which shows how close ties are, the heightened desire of Manila to cooperate with Beijing and the high degree of political trust. The significance of this visit lies in that it would further promote pragmatic cooperation and turn the consensus between the two countries into concrete action.
Since Duterte assumed office in 2016, he has taken a more pragmatic approach in dealing with Sino-Philippine relations. He has attached more importance to economic cooperation and played down the South China Sea dispute. Given this shift, some people label Duterte a "pro-China" president, which I don't agree with. As the president of the Philippines, Duterte's foreign policies are based on national interest of the Philippines and the deterioration of relations with China is harmful to the national interest of the Philippines.
Some Filipinos have criticized Duterte's China policy for being too weak, arguing that Manila should adopt a tougher stance on the South China Sea arbitration ruling. These people are influenced by some external powers.
When relations between China and the Philippines develop steadily, people with ulterior motives speculate about a "debt trap" in relation to the cooperative projects between China and the Philippines under the framework of the China-proposed Belt and Road Initiative (BRI). The "debt trap" is in fact a figment of imagination of the West. Because most BRI projects relate to infrastructure, which are characterized by high investment and a slow pace to turn profitable, many countries cannot afford the huge investment. Those who hyped the "debt trap" claimed the projects lack profitability, which is not objective. As the largest developing country, China has its own experience, a unique profit model and has invested sufficient funds in infrastructure. Therefore, Chinese financial institutions are major financiers of BRI infrastructure projects.
As the competition between China and the US is intensifying, the further development of Sino-Philippine relations is of great practical significance for both China and the Philippines. For Manila, although Washington is a military ally, Beijing is its largest trading partner. When it comes to core national interests, the Philippines may not choose to stand by the US. Especially in recent years, with the gradual advancement of the BRI, the Philippines has realized the tremendous opportunities brought about by the initiative and there are more and more cooperation plans between Beijing and Manila. Therefore, it's imperative for Manila to maintain positive Sino-Philippine relations on the right track for the Philippines' economy.
As for China, its neighborhood has always been the focus of the diplomacy. In the context of increasing competition between China and the US, ensuring peace and stability in the neighborhood and maintaining close cooperation with neighboring countries, such as the Philippines, is very important.
We must continue to build a harmonious, secure and prosperous neighborhood and adhere to the policy of amity, sincerity, mutual-benefit and inclusiveness toward its neighbors so as to build a community of shared future with neighboring countries and create a favorable environment for China's rise.