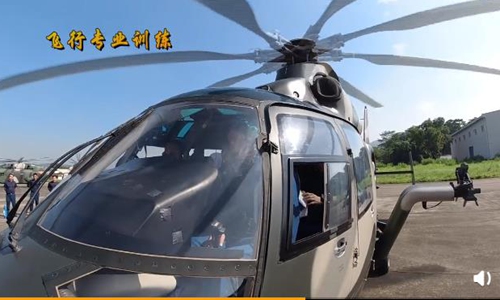 Multiple units of the People's Liberation Army (PLA) Hong Kong Garrison conducted training sessions at the start of 2020, with the aim of having the capability to win wars.
A video teleconference on Thursday called on the PLA Hong Kong Garrison to mobilize for training, according to a video the garrison released on Tuesday on its Sina Weibo account.
Troops from the Army, Navy and Air Force, including senior officers, put their shooting skills to the test on live-fire target ranges.
Officers honed their command skills in an examination room, while soldiers practiced bayonet charges in the field, according to the video.
Special forces ran professional training, including handgun trick shots, sniping from moving platforms, building climbing and rappelling walls and armed marching.
Honor guards practiced marching in formation and coastal troops finished a series of practice sessions including what seemed to be chemical attack countermeasures, CPR and flag signaling.
Helicopters including Z-8 and Z-9 took to the sky for flight drills, as logistics support units practiced cooking and setting up field repair stations.
Communication troops also trained with radio equipment.
Armored personnel carriers and warships were also spotted in the video.
An internet user commented on the video that the PLA Hong Kong Garrison's training was for real and not just for show, and she expects the garrison to be capable of winning wars.
"You are right," the garrison replied.