Five years ago, China proposed the Belt and Road Initiative, aiming to build a trade and infrastructure network connecting Asia with Europe and Africa along the ancient Silk Road trade routes. 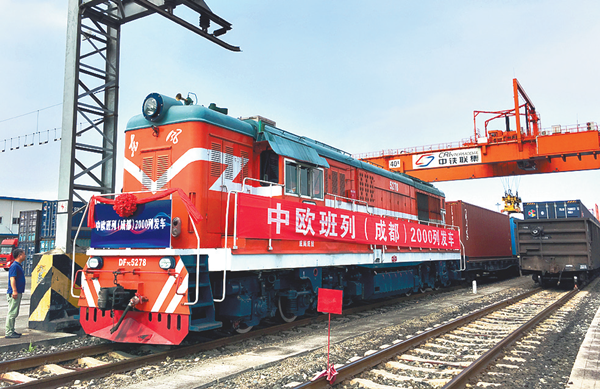 The freight train from Chengdu to Europe has already made more than 2,000 journeys. (Photo: China Daily)

Under the initiative, a railway service was launched, linking the Chinese city of Chengdu with Lodz in central Poland.

Today, it has become not only a popular logistics route for China to trade with Europe, but also the fastest direct freight route between the two sides. The service has also boosted the development of the Polish transport and logistics industry.

"The Belt and Road Initiative certainly had a positive impact on the development of the entire Polish TSL (Transport-Spedition-Logistics) sector, as well as many companies - including our company," said Marcin Dobruchowski, president of Spedcont, a Polish company which operates a cargo terminal in Lodz.

"We commenced cooperation with China less than five years ago," Dobruchowski said. "The first trains from Chengdu came once a week and included only imported cargo. Today, however, trains to and from Chengdu depart every day and the trade cooperation is developing very well, with the number of containers transported on the Belt and Road route growing."

In 2016, around 250 trains arrived at the Spedcont terminal. Last year, the number doubled. Now, the terminal operates about 50 trains in either direction each month.

"Taking into account the current trends and market situation ... more investments are planned for this and next year," Dobruchowski said.

The BRI has brought rapid changes to market conditions. The company has benefited from this and invested a lot, Dobruchowski said.

"The terminal is one of the largest facilities of (its kind) in Poland. We have permanently increased (its) operational capacity so that we can handle more containers from China," he said.

Another Polish logistics company, PKP Cargo, is making similar changes to meet the development of rail freight transport between China and Poland within the next few years.

PKP operates the Malaszewicze Logistics Center, one of the largest railway terminals in Europe. Around 60 percent of the center's capacity is being utilized now. In 2026, its capacity will increase almost four times. The company is now systematically increasing its reloading capacity and implementing a long-term investment program.

"The dynamic growth of transportation within the BRI has stimulated the development of Polish logistics companies," Czeslaw Warsewicz, chief executive officer of the company, said.