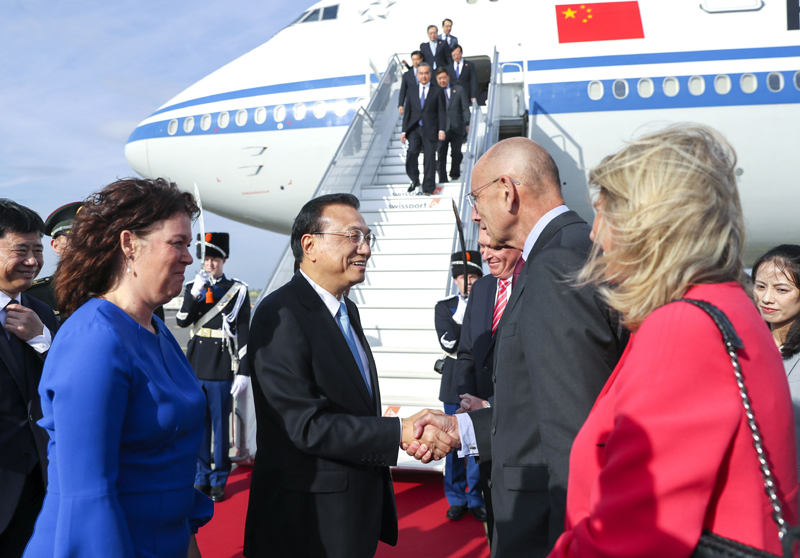 THE HAGUE, Oct. 14 (Xinhua) -- Chinese Premier Li Keqiang called for renewing the friendship between China and the Netherlands as he arrived in the country on Sunday for an official visit.

This is the first such visit to the country by a Chinese premier in 14 years.

"I have come to the Netherlands to renew and enhance a long-running friendship. A bright future dawns only when we maintain," Li said in an article published Sunday on newspaper Nouvelles D'Europe.

Noting that the world is now facing the headwinds of unilateralism and protectionism, Li said the solution to the challenges lies in "making a stronger commitment to uphold multilateralism, free trade, economic globalization and an open world economy, and striving to sustain the hard-won global recovery with concrete and concerted efforts."

The development in China driven by a new round of reform and opening-up has created new space for cooperation between the two countries, Li said.

"As a Dutch saying goes, happiness doubles when you share it. Likewise, opportunities will multiply when we share them," Li said in the article titled "A time to renew friendship and embrace a brighter future."

Efforts to advance the Belt and Road Initiative will provide more opportunities to leverage the advantageous location of the Netherlands as the gateway to Europe and facilitate connectivity between China and Europe by making full use of the convenient land, sea and air transportation in this country, he said.

The boom of new growth drivers and upgrading of the industrial structure in China will cultivate new areas of technological cooperation, and Chinese people's pursuit of a better life with higher household spending promises a new market for quality Dutch products, he said.

Meanwhile, China's innovation-driven development strategy being implemented in full swing will offer new impetus for creative industries in the Netherlands to join in the development of the innovation economy in China, Li said.

"With a host of measures in place to deepen reform and expand opening-up, especially to widen market access for foreign investment in services sectors, the financial sector included, China will generate more promising business opportunities for Dutch companies and investors," said Li.

"This is a commitment China has made not just to the world but more so to serve China's own development. We will stay committed to these goals," he added.

Stating that the process of reform and opening-up will see China further align its domestic rules with international practices and seek development synergy with the rest of the world, Li said the Netherlands and other countries are welcome to share in China's development opportunities.

"I trust that the Netherlands known for its pioneering spirit will be an early bird in China's new round of reform and opening-up. With joint efforts, China, the Netherlands and Europe as a whole will all embrace a brighter future," the premier said.