President Xi arrives in the UAE for state visit 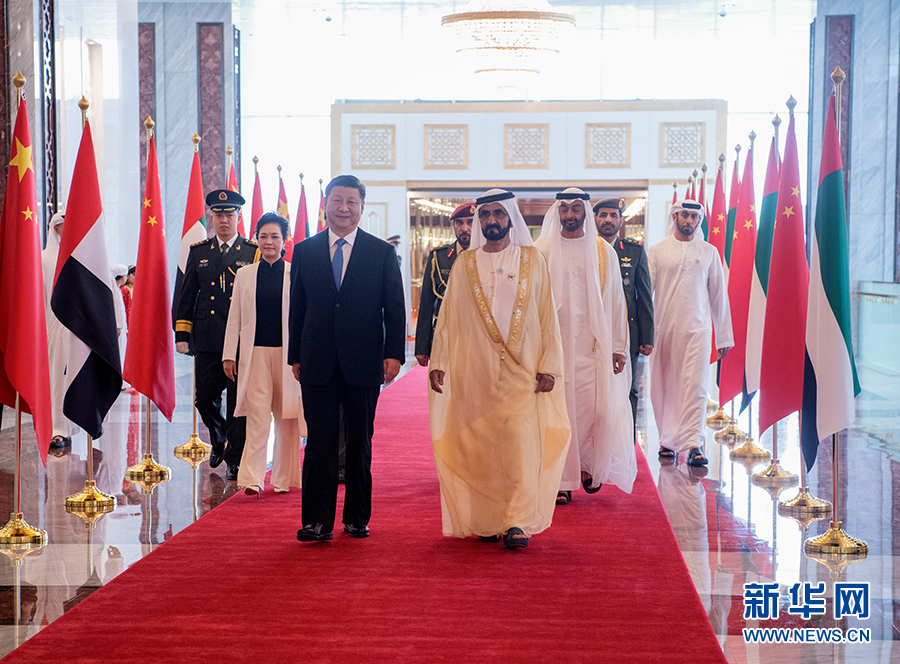 Chinese President Xi Jinping arrived here on Thursday for a state visit to the United Arab Emirates (UAE), the first by a Chinese head of state in 29 years to the Arab state.

Xi's plane was escorted by the UAE fighter jets when it entered the country's air space.

Upon their arrival, Xi and his wife, Peng Liyuan, were warmly received by the UAE Vice President and Prime Minister Sheikh Mohammed bin Rashid Al Maktoum and the Crown Prince of Abu Dhabi Sheikh Mohammed bin Zayed Al Nahyan. They were also presented with flowers by some local children.

The UAE's vice president hosted a welcome ceremony for the Chinese president at the airport.

A 21-gun salute was fired while Xi and his wife Peng inspected the guard of honor. Xi held cordial talks with the vice president and the crown prince.

Since the establishment of their diplomatic relations 34 years ago, China and the UAE have always been respecting each other and treating each other as equals, Xi said, adding that bilateral ties have seen remarkable progress with fruitful pragmatic cooperation achieved in various fields.

He said that the UAE is the first stop of this overseas trip, and also the first country he visits since his re-election as President of the People's Republic of China.

This shows that China attaches great importance to its relationship with the UAE, he stressed.

Xi said that he has felt the enthusiasm and friendliness of the UAE people as soon as he had arrived in Abu Dhabi, and that he was deeply moved by that.

The Chinese president said he looks forward to exchanging views with the UAE leaders in an in-depth way on advancing bilateral relations. 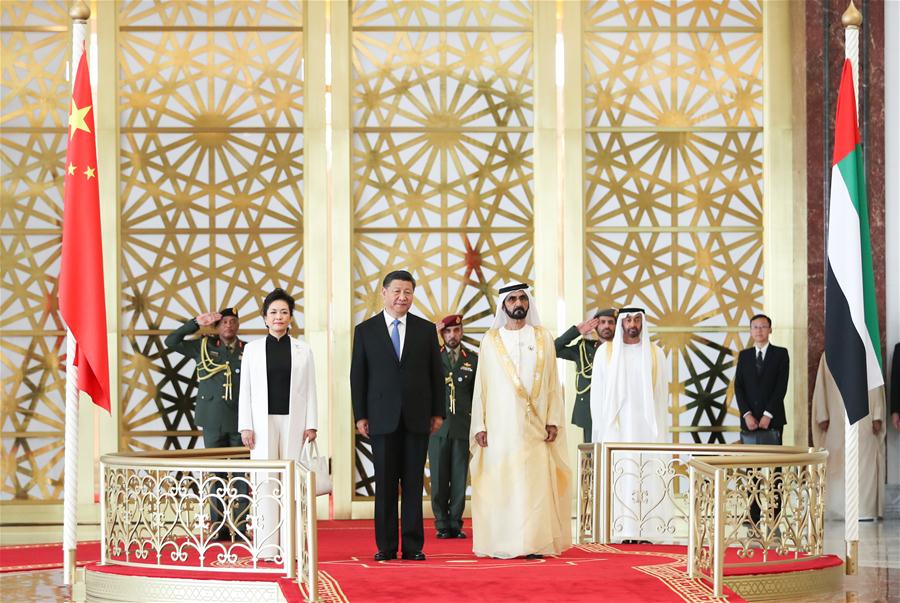 Chinese President Xi Jinping, his wife Peng Liyuan and the United Arab Emirates (UAE) Vice President and Prime Minister Sheikh Mohammed bin Rashid Al Maktoum are seen on a reviewing stand in Abu Dhabi, the UAE, July 19, 2018. Xi arrived here on Thursday for a state visit to the UAE. The UAE's vice president hosted a welcome ceremony for the Chinese president at the airport. (Xinhua/Xie Huanchi)

Xi expressed his confidence that the visit will be a great success with efforts made from both sides and will help further cement the friendship between the two countries and the two peoples.

The UAE vice president and the crown prince warmly welcomed Xi's state visit, calling Xi an old friend and a good friend of the UAE people.
It is a great honor that Xi chooses the UAE as the first stop of his overseas trip after re-election as Chinese president, said the UAE leaders.

People from all walks of life in the UAE are eagerly looking forward to Xi's visit, which they think will be of historical significance and will help further promote the development of bilateral strategic relations in a forceful way, said the UAE leaders.

'Work together, create a better future'

"The UAE is the first Arab state I will visit since I was re-elected as Chinese president in March, I wish to promote the relations between China and the UAE during this visit," said Chinese President Xi Jinping in his article titled "Work together, create a better future" which was carried by UAE newspapers on Wednesday.

Xi vows to work with the leaders of the UAE to work out a blueprint for cooperation and to construct the community of common destiny with the Belt and Road Initiative.

China and the UAE established diplomatic ties in 1984 and the two nations have both created miracles in development during the past 34 years.

The UAE is one of the first countries to embrace the China-proposed Belt and Road Initiative, and also a founding member of the Asian Infrastructure Investment Bank (AIIB).

After the UAE, Xi will travel to Africa to visit Senegal, Rwanda and South Africa, where he is scheduled to attend the 10th BRICS summit in South African city Johannesburg from July 25 to 27.

He will also pay a friendly visit to Mauritius during a stopover on his way back to Beijing.