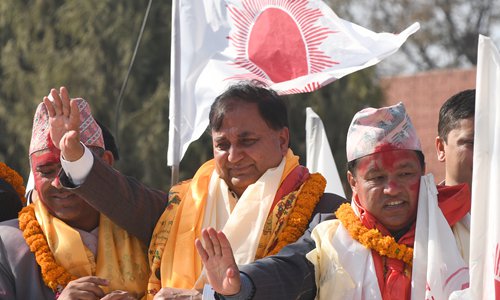 A Nepali prime minister that is friendly to China could improve economic cooperation between the two countries but would upset India, which considers South Asia as its backyard, Chinese experts said.Former Nepali Prime Minister Khadga Prasad Oli on Sunday won a seat in parliament and his Communist UML party and Maoist allies were expected to win a majority, Reuters reported.With Oli as the next prime minister, ties may improve further and China's investments in Nepal could proceed more smoothly, Hu Zhiyong, a research fellow at the Institute of International Relations of the Shanghai Academy of Social Sciences, told the Global Times on Tuesday."The possibility of Kathmandu moving closer to Beijing will have negative consequences for India, which should be anticipated and promptly dealt with," Hindustan Times reported on Tuesday.China has given Nepal access to its ports and has been talking about the construction of a joint rail link. But the most significant move is the possibility of China supplying Nepal with petroleum products, which now come exclusively from India, Hindustan Times reported. Nepalese-Indian relations will become more complex and difficult as India has been drawing other South Asian countries to its side and opposing China's Belt and Road initiative, Hu said. India sees South Asia as its backyard, but is unable to offer enough support to the economic development of South Asian countries, which may cooperate more with China in the Belt and Road initiative, Hu noted.Oli, 65, has vowed to form a government that lasts a full five-year term, something no prime minister has achieved since parliamentary democracy was established in 1990, Reuters reported.Reuters reported that Oli's campaign has called for the extension of the Chinese railway network into Nepal and other infrastructure projects to create jobs.Final election results are expected at the end of the week, India's NDTV reported.