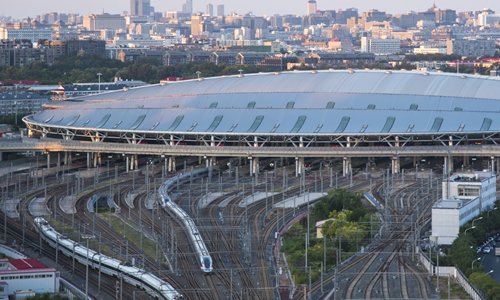 An old Chinese proverb goes, "Frequent shifts make a tree dead but a person prosperous." "Shifts" here are used to convey a sense of movement. How can people move from one place to another? It needs road, rail, air and water connectivity - an implication of multimodal transport. One of the objectives of the China-proposed Belt and Road Initiative (BRI) is connectivity - making people, funds and resources flow.
Connectivity provided by roads will stimulate the economy. It is not only about the transportation of goods, but also the flow of people. Such flow provides employment opportunities for people from remote and impoverished areas.
For most developing countries, the first step at economic take-off is to make young people in underdeveloped areas move to places with employment opportunities.
China's development experience indicates that the flow of people from one part of the country to another has been the foundation of the country's success. From the 1980s, hundreds of thousands of young people living in inland rural areas and remote places sought jobs in coastal cities in South China's Guangdong Province and East China's Fujian and Zhejiang provinces. They formed the base on which China's gargantuan manufacturing industry stands.
Till now, such flow is still creating the driving force and opportunity for development. The high-speed railway helps move a mass of people from one part of China to another. A report released by the World Bank on Monday shows that high-speed rail services in China compete with road and air transport for distances up to about 1,200 kilometers. Official data reveals that by the end of the first quarter of 2019, China's high-speed railway had transported more than 10 billion passengers.
China's development experience also shows that connectivity provided by land transport facilitates logistics, not only giving business owners easier access to communication and more investment, but also providing more opportunities to choose a job from. All this has a multiplier effect on the economy.
In an article published in the latest issue of Foreign Policy, Ahmed Mushfiq Mobarak, an economics professor at Yale University, has written about the Bangladeshi experience with movement of labor force in this South Asian country. He and his colleagues examined a program introduced in northern Bangladesh in 2017 that offered round-trip transport subsidies to poor households to enable one member to temporarily move to nearby cities in search of work. They found that it could improve the quality of life of these families. The professor therefore concluded that "Instead of bringing jobs to the people, bring the people to the jobs."
Such measures have already been carried out in China. The frequent flow of people in China is largely attributed to convenience in movement and low cost of transportation. High-speed railway fare is only one-fourth of that in other countries and regions.
During the Spring Festival holidays this year, 6 million Shenzhen residents went back to their hometowns, making this migrant city almost deserted. Migrant workers, some of them having worked in the industrial metropolis for more than 30 years, must have the experience of  taking the low-priced option of slower green trains.
In the 1980s, the green trains took a huge number of young people from remote and underdeveloped regions to promising coastal areas. They hoped for better opportunities and a prosperous future. Till today, the green trains are still the main transportation form for many people for short trips in some areas. Hundreds of thousands of farmers still take trains and buses to find a job in cities.
With the advancement of the BRI, some road and railway projects have been completed. A number of countries have started setting up economic development zones along the Silk Road routes in an attempt to boost their economy through connectivity.
According to Professor Mobarak, in places where they have already built roads and railways, governments, banks and UN agencies can help local factories employ more people from remote and poor areas and provide transport and telecommunication subsidies.
China's experience of boosting employment via connectivity offers lessons for countries along the BRI routes. For instance, governments help set up sales networks for farm products, organize visits by agricultural technology experts to rural areas and provide school transport to children of underdeveloped areas. Such activities will of course make the BRI more effective.