Protectionism shouldn’t be a distraction in fight against coronavirus 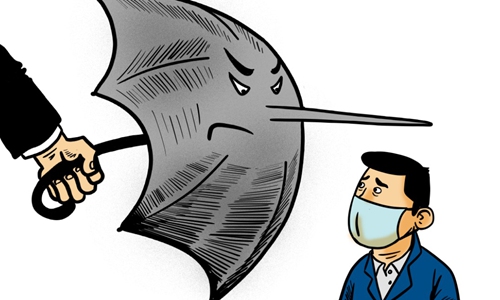 (Illustration: Luo Xuan/GT)
As the outbreak of the novel coronavirus (2019-nCoV) rattles the Chinese economy, globalization is also expected to face an unprecedented test from the sudden shutdown of the world's factory.

While various countries have put in place barriers aimed at controlling the spread of the epidemic around the world, trade protectionism should not become a distraction from the fight against the virus.
After the World Health Organization (WHO) recently declared the novel coronavirus a global public health emergency, some countries have taken measures to prevent and control the epidemic, which are understandable and justified. Yet, there are other countries that overreacted, disregarding the WHO recommendations of avoiding unnecessary interference with international travel and trade.
For instance, while the US government expressed its willingness to offer China assistance in the fight against the epidemic, it raised its travel warning for China to the highest level and temporarily banned the entry of all foreigners who traveled to China in the past 14 days.
If anything, such measures will directly reduce flights and business between the two countries, which is likely to hit bilateral trade. Moreover, US Commerce Secretary Wilbur Ross said in a TV interview that the novel coronavirus outbreak in China would "help to accelerate the return of jobs to North America."
And when the yuan's rate weakened against most currencies due to the virus impact on the Chinese economy, the US government reportedly finalized a new rule this week to impose anti-subsidy duties on products from countries that Washington deems to be undervaluing their currencies, potentially including China.
It is a bad time for protectionism to make waves as global efforts should be focused on fighting the epidemic.
Whatever the reason is, the inappropriate overreaction and the "America First" mind-set will do no good for the US economy. On the contrary, it will only cause a further drag on the already depressed international trade and weigh down the recovery of the world economy.
As the world's second largest economy, China is already deeply integrated into the global industrial chain, with its factories a key part of the global supply chain. So, the recent disruption of the virus to China's manufacturing has resulted in a supply crisis to a certain extent for businesses in the rest of the world, which is an inevitable part of globalization.
For instance, Hyundai Motor announced it will suspend production in South Korea due to the delayed supply of parts.
With the novel coronavirus outbreak taking a toll on the world economy, protectionist measures against China at such a difficult time will only accelerate and exacerbate the impact of the virus on the global economy.
It is indeed necessary to take measures to regulate traffic when it comes to stopping the spread of the epidemic, but that should not include excessive obstacles for normal exchanges and practical cooperation among countries, which will only cast a shadow on globalization.