Rail lines from Yiwu to Europe benefit from marketization 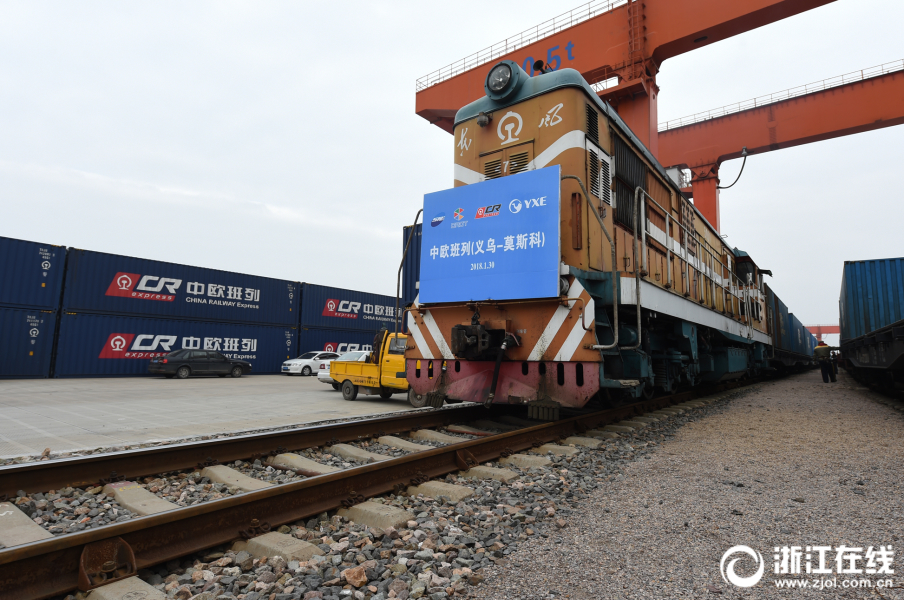 The longest freight-carrying railway between China and Europe starts in the coastal Chinese county of Yiwu, the mega wholesale center in east China's Zhejiang Province that is growing globally.

Four years after the first train completed its journey on this rail line, 75,000 small merchants in the city's international mart now sell commodities to over 200 countries and regions, with the Belt and Road logistic system spanning in all directions.

Yiwu merchant Yu Lingli, who sells handmade dolls to many countries around the world, thanks the railway for boosting sales and cutting costs. She agrees that the freight train is very safe for cargo and has shortened the transit time and sped up capital turnover. One of her customers also said that it relieves cash flow pressure and brings big savings when it comes to delivery.

At Yiwu Railway Port, small commodities and other cargos go through customs clearance and inspection, before traveling to overseas markets along the silk route railway. This freight railway network reaches nine countries in central Asia and Europe. Authorities say they have helped open up more trading destinations along the route.

The railway express saves a lot of travel time compared with shipping things by sea. For instance, the trans-continental voyage from Yiwu to Spain's capital Madrid takes only 18 days. Since the rail line opened, the container train from Yiwu to Madrid has been operating twice a month for over three years. By the end of July 2018, the rail link from Yiwu to Europe had made 460 trans-Eurasia trips. Its journeys in the first half of 2018 were doubled compared with the same period last year.

Experts said that every express train leaving from Yiwu is fully loaded. Wang Meicai, general manager of Yiwu Land Port Group, said that China-Europe freight trains serve as a platform for more convenient trade and logistics. Yiwu exports are mainly general merchandise while most of the imports are food, general merchandise, automotive components and machine tools. He thinks Yiwu has a distinct advantage in terms of sourcing goods. "Goods with relatively higher added value prefer to be shipped by rail."

The railway line meets a flourishing market demand, and it's a market-driven operation. A private company has been operating container trains from Yiwu, under the commercial brand YXE, which stands for Yiwu, Xinjiang and Europe. It is China's only rail link to Europe run by a privately funded company.

The chairman of the company, Feng Xubin, said private enterprise is more flexible and innovative in expanding the market. He said the company aims to be more market-driven and independent of government subsidies, to show respect to foreign railway companies and customs. He thinks potential players, for example in the open capital market of Europe, are closely watching where China will take its freight train services. Feng said it is their mission to lead the marketization of China's railways to Europe.

In a step toward that ambition, YXE has recently sent a special train to Moscow, carrying parcels for China's leading delivery service provider Yuantong. The company has also worked with other postal companies and cross-border e-commerce enterprises to further attract business opportunities and verify their products and services. YXE's partners also hope this will help them tap into the Belt and Road markets.

In the long-term plan of the Belt and Road Initiative, this efficient China-Europe logistics channel is letting more players take part.