Zhen'an, a county in Shangluo city, Shaanxi province, is seen nestled in the wooded slopes of the Qinling Mountains. TAO MING/XINHUA 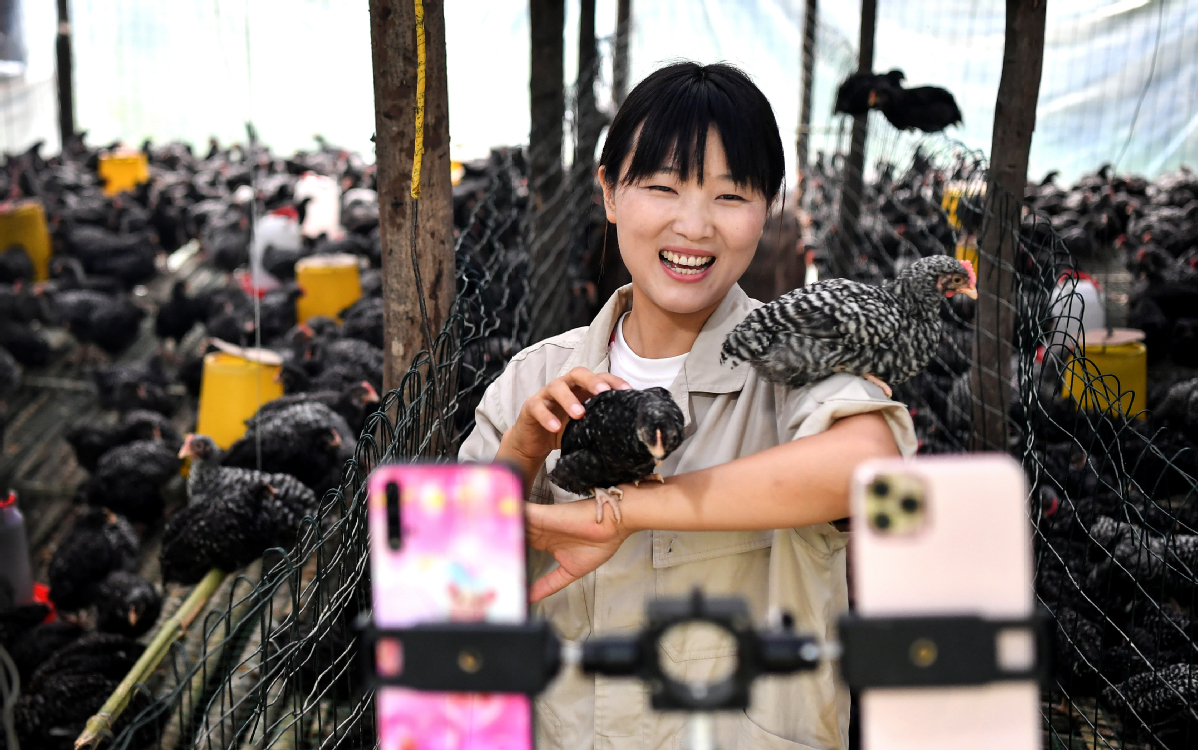 A woman displays hand-reared chickens via a livestream at a coop in Siping village, Shangluo, Shaanxi, on July 20. LIU XIAO/XINHUA 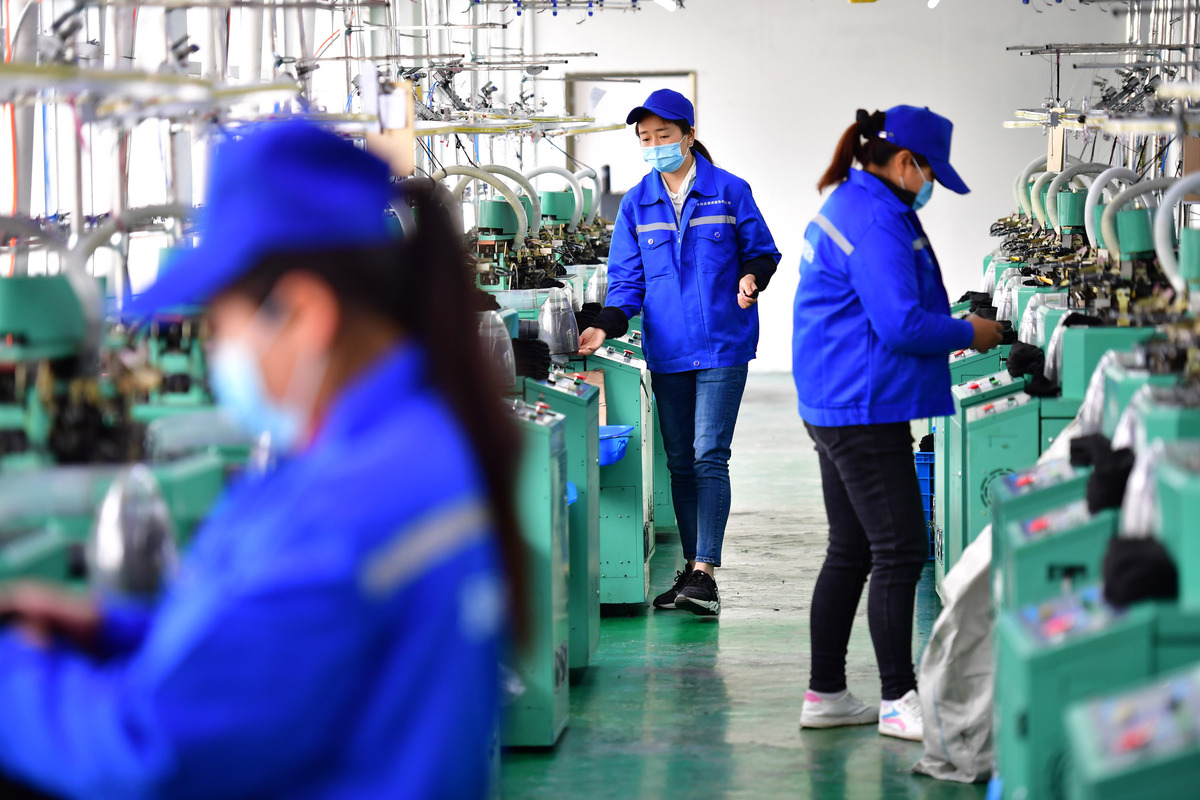 Workers make socks at a factory in Ankang on April 22. SHAO RUI/XINHUA Sitting in a factory workshop near the center of Laoxian, Ankang city, in the northwestern province of Shaanxi, Zhang Yundi used a sewing machine to turn fragments of cloth into a toy bear.

Her children attend a school just a few minutes' walk from home and her husband works at another factory nearby, earning 3,000 yuan a month.

The 40-year-old's life is anything but poverty-stricken, but before she and her family moved to the community three years ago, things were very different.

At the time, Zhang, her husband and their three children lived in Wanfushan, a village in a mountainous part of Laoxian, where there was no tap water, electricity or sealed roads to connect residents with the outside world.

Drinking water had to be carried uphill in buckets to their home, a poorly constructed mud-and-brick building. The 70 kilometer trip to the downtown took hours along dirt roads.

Zhang's family led an extremely hard life. The household's combined annual income amounted to just a few thousand yuan, and relied on Zhang doing farm work in the village while her husband was a migrant worker on construction sites in large towns.

"Once, my eldest daughter fell ill and was very weak. My husband was away from home and couldn't be reached because neither I nor anyone in the village had a landline or a cellphone. I didn't even have 10 yuan in my pocket to pay for her treatment," Zhang said, trying to hold back her tears as she recalled those difficult days. "I felt so hopeless."

Things began to improve in 2017, when the family of five was relocated to an apartment in the Jinping residential community.

The compound was specially constructed near the center of Laoxian to house impoverished families who lived in areas that lacked convenient transportation and other modern infrastructure.

"We Chinese often say 'Each place has its own water and soil to support its inhabitants.' But if the water and soil can't provide enough support for the inhabitants or can't guarantee a good life for them, relocating people to a new area is a better option," said Yang Juqiao, Party chief of Laoxian.

"That's why we decided to build the community. We wanted to move people from areas that lacked transportation facilities or contact with the outside world and were prone to natural disasters, such as floods and landslides, to places where it would be convenient for them to go to work, school or the hospital."

According to Yang, construction of the community started in 2011 and was completed last year.

So far, 4,173 people have relocated from 11 settlements in Laoxian, including Wanfushan, Zhang's home village.

In recent years, local governments in Shaanxi have frequently lifted people out of extreme poverty by relocating them to places with better living conditions, facilities and job opportunities.

One successful example is a residential garden community in Yungaisi, a town in Zhen'an county, Shangluo city. The community houses at least 515 families, some of whom are still classified as impoverished.

Before, Zhen'an natives lived in densely populated regions or mountainous areas in the west of the county, where the poor roads resulted in constant traffic jams and educational, medical and other resources were scarce.

To improve living conditions for local people, construction of the garden community started in 2012. Since then, 50 residential blocks have been built, all equipped with running water, electricity and the internet, as well as a kindergarten, a health clinic, a public square, sealed roads and a parking lot, said Jiang Weijie, Party chief of Yungaisi.

Bu Mingqing and her family are among those who have benefited from the project.

In 2017, the family relocated from a barren, underdeveloped region of Zhen'an to a 105-square-meter apartment in the residential community.

When Bu first moved to the community, her lack of education and work experience meant she was unable to find a job.

"I was so concerned about how to make a living. My family was so poor, and I had children to raise－I really didn't know what to do," she recalled.

Under an arrangement with the local government, she finally got a job as a cleaner at a factory near the community, earning 1,100 yuan a month.

In the area around the garden community, 18 buildings have been constructed for the use of labor-intensive factories, such as those manufacturing clothes and components for electronic devices, and plants that process agricultural produce.

The factories have provided 870 jobs for local residents and helped raise the incomes of 185 impoverished families, Jiang said.

The change has improved Bu's life beyond measure. "Before moving to the community, I had to borrow money to keep afloat, as harvests from the barren land were too poor to live on," she said.

"Now, living in such a beautiful community with good facilities and having a job that brings a stable income every month, my life is something I never dared dream of. I'm really grateful to the local government."

Yang, Party chief of Laoxian, noted that relocation is not an end in itself. "Even living in better places, people still need jobs to keep going," he said, adding that to meet residents' needs, the Laoxian government attracted investment from other provinces and set up four businesses near the Jinping community in 2015.

"So far, the factories have hired at least 155 residents, and 55 of them are from impoverished families," he said.

The government of Gaobadian township, Shangluo, has helped provide better lives for people who relocated to its Fuqiao community by setting up factories that provide job opportunities.

The factories, which specialize in a wide range of activities including fungi cultivation, egg processing and the manufacture of electronic components, employ at least 580 residents, with 320 coming from impoverished families, according to Yang Hao, Gaobadian's Party chief.

Working five days a week, she can easily earn more than 2,000 yuan a month.

"Before I started work here, my two sons and I relied totally on my husband for support, which meant life was very difficult," she said.

"Now, with the salary I earn at the factory, our lives are much better."

In addition to providing jobs, some local governments have gone a step further by organizing vocational training to allow residents to acquire work skills.

The goal is to help local women master skills such as housekeeping that will help give them an edge in the job market, Yang Hao said.

In the old days, Le stayed at home to take care of her four children, which left her husband as the family's sole breadwinner.

To reduce the burden on him, Le decided to learn some skills and look for a job. She said the training classes were very helpful.

"The teacher was very patient and taught us well," she said. "I gained a lot of knowledge and learned techniques for cooking and caring for children and seniors."

Now, she is planning to find a job as a babysitter or waitress in the town and is optimistic about the future.

"I think I can land a good job, thanks to the training," she said.

Xin Wen contributed to this story.