Reorienting Europe in a changing world 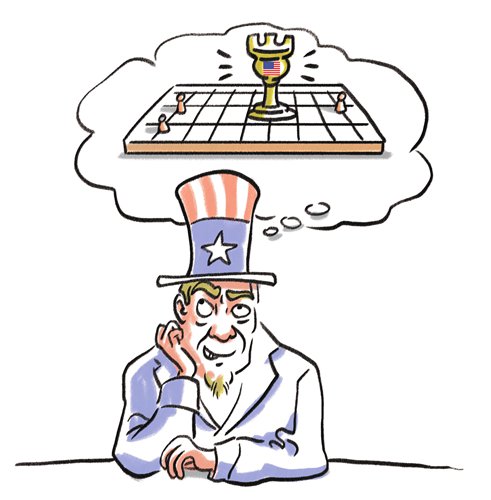 Krastev's article in FP magazine "3 Versions of Europe Are Collapsing at the Same Time" deserves attention. His analysis is part of a wide debate over European and Western fragility over the last 20 years.

European problems, under the emergence of new political forces and weaknesses of the monetary union, have been prompting claims for reform of the European Union or abandoning the bloc. In spite of the official will to keep alive the euro space and the EU experience, there is an urgency to seriously facing the prolonged structural problems, which have been widely debated in articles and books in recent years.

However, the political elite and European bureaucracy did not get the point, defending the EU ideologically, regardless of the reality. Many attributed the EU's current problems to US President Donald Trump's new policies on NATO and trade issues. However, many problems surfaced years before Trump took power.

Focusing on new so-called cultural turns, we risk losing the opportunity to improve the European experience according to its turbulent historical phases. We need to tackle European structural problems.

An example: Italy, the father of the European integration dream, is experiencing the longest socioeconomic crisis of the entire Republican history. Alberto Bagnai, Lega senator, clearly stated how we should reorient the European path: "The rules are not totems to bow to but instruments to adapt to the times. The rigid application of often-irrational rules is incompatible with solidarity. Rules are increasingly presented as the alibi of the political class," concluded Bagnai.

The West is losing its attractiveness. Not since Trump came to power, but since years ago. The "imitation imperative" of the Western model proved wrong in relation to the economic and geopolitical disaster of a European project embedded in a cemented military and economic alliance with the US. A European project, that fell since the 1980s in the neoliberal trap, has already failed in many parts of the world and in the core countries as well.

In his article, Krastev suggests that the EU has to forge its own military might. However, Washington would not accept a purely independent Europe, militarily and strategically. The US wants to see a Europe that is militarily subservient to the US-led NATO, economically strong as a market, but geopolitically weak.

Above all, during a historical period in which Europe is recreating bridges with China, the US is afraid of losing influence. The US does not want the disintegration of the EU, but neither does it desire a strong EU, a geopolitically independent entity.

Let me recall a quotation from a 2005 Robert Kaplan article published by The Atlantic and significantly titled "How we would fight China." In the article, the influential neocon expressed the structural US position toward Europe: "NATO and an autonomous European defense force cannot both prosper. Only one can - and we should want it to be the former, so that Europe is a military asset for us, not a liability, as we confront China. "

Transatlantic trade friction is creating severe strains between the two sides of the Ocean, even though some signs of improvement emerged during the last meeting in the US. Trump's approach to NATO and toward Russia could potentially re-address the imperialistic posture of the US-NATO system. On the other side, the recent announcement by US Secretary of State Mike Pompeo of the US intention to invest in the development of the Indo-Pacific region is a weaker form of keeping alive the competition to confront China's peaceful rise.

I do think it is historically impossible to delink European phases of integration with US expansionism, through corporations and military might. Mainstream media often omit this historical part. Arguing around European fragilities, past and current crises, we need to underline the international transformations around the world during the last decades, financially, commercially, geopolitically.

Therefore, the European crises have emerged due to a combination of internal and international political and economic mistakes, related to a group of co-responsibilities. For example, the structural disequilibrium in Europe has to do with internal mistakes: "The disarticulation of the European Union began to take place when the destructive potential of the community architecture emerged, centered on a structurally exporting country like Germany, which absorbs liquidity from the periphery, discharging deflation and socio-economic devastation. From this point of view, the single currency accentuated the differentials of competitiveness between countries," said Giacomo Gabellini, independent researcher and author of the book Eurocrack, 2015.

On the global geographical scale, waging wars against sovereign states, such as Serbia, Libya or Syria, just to mention a few, cannot be interpreted as marginal factors in the current migration crises and regional problems around Europe. In addition, supporting the state coup in Ukraine, as the US did under the Obama administration, has meant supporting neo-Nazi forces, a "democratic government" legitimized by the US and partners (absurdly in Europe), in spite of the strong presence of far-right Nazi- inspired forces.

This point is completely neglected by US mainstream discourse, which has created a brouhaha over Trump's overture to Russian President Vladimir Putin, a cooperative approach, and lies about the constant interference in sovereign countries through undemocratic and violent methods.

The EU realizes it can reform itself taking the numerous and well-grounded criticism seriously, and at the same time rethinking its international role. Supporting multilateralism, as the EU always claims, obliges it to strengthen cooperation with China, which is offering an opportunity to the entire world through an open cooperative approach clearly summarized by the Belt and Road initiative.

The author, Fabio Massimo Parenti, is an associate professor of international studies at the Institute Lorenzo de' Medici, Florence, member of CCERRI think tank, Zhengzhou, and member of EURISPES, Laboratorio BRICS, Rome. His latest book is Geofinance and Geopolitics, Egea.