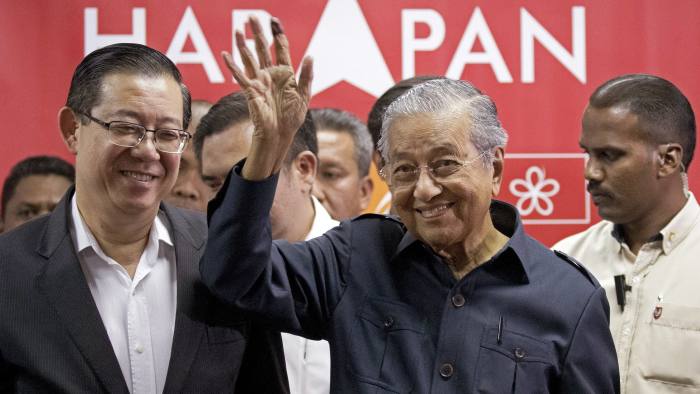 Bangkok (People's Daily) - On May 10, 92-year-old Malaysian politician Mahathir Mohamad became the world's oldest leader, after a shock victory in the country's election.

Born and raised in Alor Setar, Kedah, Mahathir excelled at school and became a medical doctor. He became active in the United Malays National Organisation (UMNO) before entering Parliament in 1964.  He served as the fourth Prime Minister from 1981 to 2003, making him the office's longest-serving holder.

Mahathir actively promoted the economic integration of Southeast Asia in the 1990s and the model of ASEAN+3. He even opposed ASEAN's participation in the Asia-Pacific Economic Cooperation, which included Western countries. As prime minister, he visited China many times and recognized the importance of the rise of China's economy. Analysts believe that Mahathir may continue his policy of supporting ASEAN. At the same time, he may also maintain close relations with Western countries and Japan.

During Mahathir's first tenure as Prime Minister, Malaysia experienced a period of rapid modernization and economic growth, and his government initiated a series of bold infrastructure projects. He was honored as the father of modernization in Malaysia. As an economic nationalist, he supported Malaysian domestic auto brand Proton Saga and paved the way for the development of the oil industry, making Petroliam Nasional Berhad the giant of the global petrochemical industry.

During the 1997 Asian financial crisis, he decisively abandoned the IMF’s contractionary monetary model, timely controlled the exchange rate and capital. As a result, he successfully reduced Malaysia’s losses and made Malaysia’s situation much better than its neighbors, such as Indonesia and Thailand.

Mahathir told a news conference he supported China's Belt and Road initiative but said Malaysia reserved the right to renegotiate terms of some agreements with Beijing, if necessary. The analysis believes this is partly due to political reasons. However, as an veteran politician with economic intuition, he is supposed to know the importance of China-Malaysia relations. Therefore, he may adjust his previous position after bargaining.

Brakedown of relationship with Najib

Najib’s father, Malaysia’s second Prime Minister, Abdul Razak Hussein, once helped and encouraged Mahathir back into the party, and made him rise quickly in the Razak government. Mahathir also cultivated Najib, known as Najib’s political instructor. After Najib became prime minister, there was a "honeymoon period" between the two. However, Mahathir accused Najib of corruption and asked him to step down. The corruption scandal revolves around a state fund, known as the 1Malaysia Development Berhad, commonly known as 1MDB. Najib denied the allegations and their relationship eventually broke.

Mahathir confirmed that he had ordered a travel ban on Najib and his wife. He also stressed that fighting corruption is the top priority of the new government.

Malaysia’s former deputy Prime Minister Anwar had once won Mahathir’s appreciation and support, even considered to be Mahathir’s successor. However, at the end of the 1990s, they began to disagree with each other and eventually the relationship broke down. In 1998, Mahathir removed Anwar’s position of deputy prime minister and expelled him from UMNO. Since then, Anwar was imprisoned for corruption and sodomy, and he became an opposition leader after his release. In 2015, Anwar was once again imprisoned on charges of sodomy and is scheduled to be released in June this year.

This time, both of them admitted that it was not  a "reconciliation," but agreed to "look forward together." Although Mahathir established his own party, it is mainly based on his personal prestige. He needs the foundation and platform of an opposition party. And Anwar needs Mahathir to attract traditional UMNO supporters.

Mahathir recently said he would then seek a pardon for Anwar, in order to hand the prime minister post to Anwar within two years. The volatile relationship between the two, from friends to foes to allies, is considered to be central to the future of the alliance.