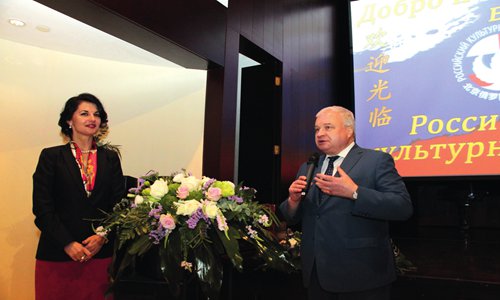 With the support of the Russian Embassy in China, the celebration of the 70th anniversary of China-Russia diplomatic ties was held at the Russian Cultural Center in Beijing on Tuesday. The representative office of the Federal Agency for the Commonwealth of Independent States, Compatriots Living Abroad and International Humanitarian Cooperation, also known as Rossotrudnichestvo hosted the event.
The Russian Ambassador to China Andrey Denisov, deputy secretary-general of the Shanghai Cooperation Organization Nurlan Akkoshkarov and Vice President of the Chinese People's Association for Friendship with Foreign Countries Song Jingwu attended the event. Representatives from the embassies of other neighboring countries in the former Soviet Union, universities and other cooperation units also attended the event.
Denisov delivered a speech, in which he stressed the significance of the 70th anniversary of the establishment of diplomatic ties between Russia and China and pointed out the historic event in which the former Soviet Union was the first to recognize the People's Republic of China on the second day after the founding of the PRC.
In Song's speech, he spoke highly of the current development of China-Russia relations and expressed gratitude to the Russian Cultural Center in Beijing for organizing the collaborative activities strengthening mutual understanding and friendship between the people of the two countries.
Olga Melnikova, head of the Russian Cultural Center in Beijing, said in her speech that both Russia and China are committed to deepening pragmatic cooperation in the field of humanities and actively pushing it to inject greater impetus into the China-Russia comprehensive strategic partnership of coordination in the new era.
Chinese and Russian participants also presented musical performances at the event.