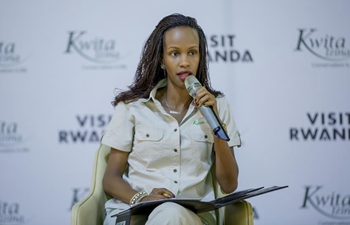 KIGALI, Aug. 20 (Xinhua) -- Rwanda sold 15,132 mountain gorilla permits worth 19.2 million U.S. dollars to tourists in 2018, higher than 15 million dollars sold in 2016 before Rwanda increased the permits price from 750 dollars to 1,500 dollars in 2017, an official from Rwanda Development Board said Tuesday in Kigali, capital city of Rwanda.

The central African country has registered an increase in demand for the tracking permits of the endangered species, said Belise Kariza, chief tourism officer of RDB, while addressing reporters about the upcoming annual baby gorilla naming ceremony commonly known as Kwita Izina.

At least 25 baby gorillas born late last year and this year will be given names in the 15th Kwita Izina ceremony held in Musanze district, northern Rwanda, on September 6, she said.

Last year, Rwanda hosted 1.711 million visitors, representing an increase of 8 percent compared to in 2017 due to efforts made by the government to promote Rwanda as a tourist destination in Africa, the official said.

The national parks revenues reached over 20 million dollars in 2018, up from over 18 million U.S dollars recorded the previous year, said Kariza.

Mountain gorillas are an endangered species with an estimated over 1,000 remaining in the world. They live in the Bwindi Impenetrable National Park in Uganda and the Virunga Mountains, a range of extinct volcanoes that border the Democratic Republic of Congo, Rwanda and Uganda.

Kwita Izina was introduced in 2005 with the aim of creating awareness of conservation efforts for the endangered mountain gorilla.

For three decades prior to the first official gorilla naming ceremony, the naming of baby gorillas was carried out by rangers and researchers that closely monitor these unique animals on a daily basis.