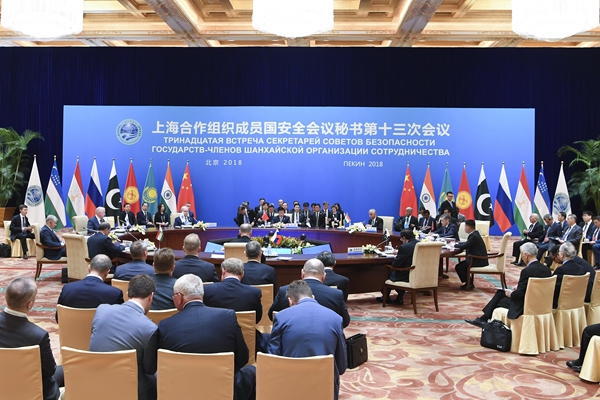 Zhao made the remarks in a keynote speech at the 13th meeting of SCO Security Council Secretaries in Beijing. Delegations from India, Kazakhstan, Kyrgyzstan, Pakistan, Russia, Tajikistan and Uzbekistan, as well as representatives from the SCO secretariat and regional counter-terrorist agencies attended the meeting.

He called on the SCO countries to give full play to the role of the SCO security council secretaries, and work together to combat forces of terrorism, separatism, and extremism.

He said the SCO countries should consolidate the legal basis for cooperation, enhance the building of cooperation mechanism, and ensure the security of the Belt and Road Initiative projects.

It is the first SCO security council secretaries meeting since the organization's enlargement. All parties at the meeting exchanged in-depth views on the current regional security situation and focused on the issues such as drug trafficking, transnational organized crime and safeguarding global information security.

A press release was issued during the meeting.

The press release said all parties will continue to implement effective border controls, exchange intelligence information on terrorism-related personnel, investigate transnational crimes committed by terrorist organizations, and prevent foreign armed terrorists and terrorist groups from sneaking into and out of the country.

They agreed that the Internet and other information and communication technologies are heavily used to promote various forms of terrorism, separatism and extremism. And they support the strengthening of pragmatic cooperation in the field of international information security.

They reiterated that the fight against terrorism is one of the most important tasks of the member countries of the organization and comprehensive measures should be taken in this area.

The countries welcomed the efforts to establish a global anti-terrorism united front with the United Nations as the lead on the basis of the international law.

For his part, Patrushev said Russia stands ready to work with China to enhance coordination and strengthen cooperation on law enforcement security.