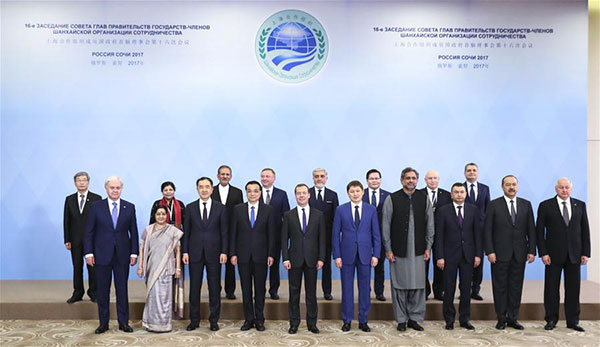 The 16th meeting of the Council of the Shanghai Cooperation Organization Heads of Government (Prime Ministers) was held in Sochi, Russia from Thursday to Friday. The meeting was not only meant to look for more cooperation consensus on the economy, culture and security, but will also set the tone for the SCO summit next year, as well as articulating plans for the future development of this regional bloc. Chinese Premier Li Keqiang attended this meeting and provided the Chinese plans for regional cooperation.This SCO meeting was the last leg of Li's foreign visit since the 19th National Congress of the Communist Party of China was held in October. It is also a wrap-up tour for China's multilateral diplomacy this year. Since the 19th congress, China's major-power diplomacy with Chinese characteristics has become more mature, with focuses on joint development with regional countries and maintenance of a just international pattern. The SCO, the only multilateral mechanism named after a Chinese city, has a clear position in China's diplomacy and will embrace new opportunities for the expansion of cooperation.Since the 19th Party congress, China's development has entered a new era, and so has its diplomacy with neighboring countries. The member states of the SCO are all China's neighbors, the relationships with whom are manifested in the principle of amity, sincerity, mutual benefit and inclusiveness advocated by Chinese leaders. In the 16 years since the SCO was established, China has provided more than $22 billion in loans and other assistance to other member states, contributing greatly to economic cooperation, cultural exchanges and daily functions of the SCO. Over the years, the SCO has achieved a spectrum of concrete results in various aspects, with its influence and mobilization ability increasing. The Shanghai spirit and the new type of views on security and cooperation that China promotes have become the core idea that guides the practice of the SCO. In recent years, the region the SCO covers has been facing increasing security threats and challenges. The three evils, the Afghan issue and the Islamic State have posed direct challenges to regional stability. In addition, the sluggish global economy and the rise of trade protectionism have set obstacles for the economic development and structural transition of member states.Therefore, the prime ministers' meeting this time was set to solve these problems, and China hopes that member states can enhance policy coordination.The meeting was also the first that India and Pakistan attended after being included in the bloc. After membership expansion, the SCO should explore its potential and create a favorable external environment for the development of member states and regional stability. Meanwhile, the inclusion of India and Pakistan raises questions for the efficiency of decision-making within the organization and its internal unity. Some effective measures should be adopted to avoid bilateral conflicts from affecting multilateral cooperation.  SCO member states are all important countries along the Belt and Road initiative. Chinese President Xi Jinping proposed the initiative in 2013, marking a new phase of China's opening-up. The advance of the Belt and Road initiative requires active participation of SCO member states and the two can complement each other. Since the initiative was proposed, quite a number of flagship projects have been implemented in SCO member states and many countries have signed strategic agreements with China. As we see opportunities and summarize our achievements, we should also foresee possible risks and challenges and explore ways to set an example of building a community of shared destiny for mankind.The SCO can play an exemplary role, as member states differ in their stages of development, cultural traditions and strategic interests. For instance, India explicitly objects to the China-Pakistan Economic Corridor and refuses to take part in Belt and Road projects. It has even crafted new plans with Japan and the US and used them as geopolitical tools to counter the Belt and Road initiative. Under such circumstances, we should break the Cold-War mentality and promote partnerships rather than alliances, which will make India change its mind and create favorable conditions for the expansion of the Belt and Road initiative.