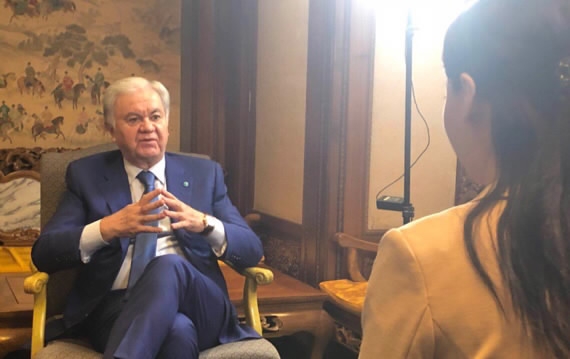 An international forum on "The New Development of Shanghai Cooperation Organization (SCO) in New Era" has been held in Beijing. CGTN reporter Su Yuting talked to SCO Secretary-General Rashid Alimov and other important attendees about the SCO, an inter-governmental political, economic, and security organization.

"The international and regional situation is undergoing complex changes," Alimov said. "Destabilizing factors and uncertainties are on the rise. The Shanghai Cooperation Organization has played an important role since its inception 17 years ago. You could say the organization has four wheels: security, economic cooperation, people-to-people exchanges and common development. There will be tremendous opportunities if these four wheels move forward together."

Alimov said efforts have been made to promote international fairness and justice by advocating multilateralism and opening up and boosting win-win development.

SCO member states have been working together in combating terrorism and drug trafficking and strengthening border defense. Besides security cooperation, China and its partners have also been exploring ways to link the Belt and Road Initiative with regional cooperation initiatives, such as the Eurasian Economic Union and national development strategies, including Kazakhstan's "Bright Road" initiative.

Erlan Karin, chairman of the Kazakhstan Council on International Relations said, "Based on mutual trust, the SCO has developed enormously. I think this year's Qingdao Summit is of historic significance. SCO member states will use the "Shanghai Spirit" as a guide to building a community with a shared future for mankind."

China has taken over the rotating presidency of the SCO. And this year's group summit will be held in June in Qingdao, in eastern China's Shandong Province.

Officials say China will deepen cooperation with other countries in security, economy and people-to-people exchanges, to bring more benefits to people from various countries and usher in a brighter future for the SCO.