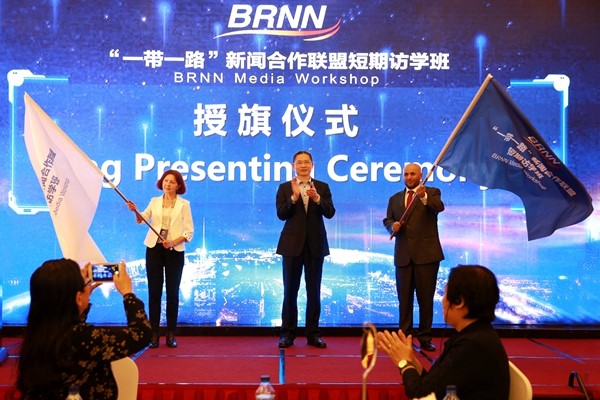 The flag presenting ceremony of the short-term media workshop for the Belt and Road News Network is held in Beijing on Oct. 21. (People's Daily Online/Hou Xinying)

The second short-term media workshop for the Belt and Road News Network (BRNN) kicked off in Beijing on October 21. The media workshop was hosted by the State Council Information Office of China and was jointly organized by the Secretariat of BRNN (the External Relations Department of People's Daily) alongside the Communication University of China.

Li Zhiqiang, deputy director of the External Relations Department of People's Daily, and Jiang Xufan, deputy party secretary of the Communication University of China, delivered speeches at the opening ceremony.

Themed "new era, new ideas, new media, new technology," the second workshop is set to conclude on Nov. 3. The participants will separately visit Gansu, Sichuan, Shandong and Jiangsu provinces for interviews and research to comprehensively understand the connotation and significance of the Belt and Road Initiative and personally experience China's achievements in development.

The first workshop, with the same theme, was held between Sept. 16 and Sept. 29. It was attended by 50 senior editors and journalists from Latin American and African countries.