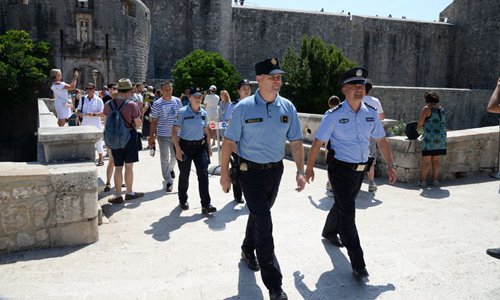 Chinese police officers who had been patrolling in Croatia for a month during tourist season finished their work on Wednesday.
Eight officers from east China's Jiangsu Province patrolled with their Croatian counterparts in Zagreb, Zadar, Dubrovnik and Plitvice Lakes National Park, all popular tourist destinations where each year more and more Chinese come to visit.
The Croatian police said the project, launched on July 13 and finished on Wednesday, was very useful and successful.
"There were no big incidents. The officers were very helpful to Chinese tourists, providing them with general information. Their presence here had a positive impact on Chinese citizens," Velimir Tisma, head of the Prevention Unit of the police department in Zagreb, told a press conference here in Zagreb.
This was the second year of such joint patrols. In 2017, the Croatian Ministry of Interior and Chinese Ministry of Public Security signed an agreement on cooperation during tourism season. In 2018, six Chinese police officers spent a month in Croatia.
"For the past 30 days we have displayed a great image of the joint patrol, strengthened the friendship between China and Croatia, and explored a new way to expand and deepen the meaning of the joint patrol," Xue Qiang, team leader of Chinese police said on Wednesday.
He noted that they hadn't just patrolled the streets, but also visited local Chinese communities here. They introduced Croatian police officers to Chinese businessmen, visited Chinese restaurants and even taught Croatian colleagues to cook Chinese cuisine. "We informed the Chinese community about security here," Xue Qiang said.
The joint patrol project has also gained support from the Croatian Ministry of Tourism. State Secretary of the ministry Tonci Glavina said that good cooperation between China and Croatia has reflected on tourism, as the number of Chinese visitors to Croatia grows rapidly.
"We see China as a strong emerging market in tourism sense, and with our continuing economic cooperation between two countries we will see in the future more Chinese guests in Croatia," Glavina said. He stressed that Croatia is perceived as a very safe destination and that safety is a kind of Croatian export product.
In 2018, Croatia recorded 18.7 million tourist arrivals and 89.7 million overnight stays. The number of Chinese visitors is growing each year. In the first half of 2019, nearly 180,000 Chinese tourists visited Croatia, 41 percent more than in the same period of 2018.