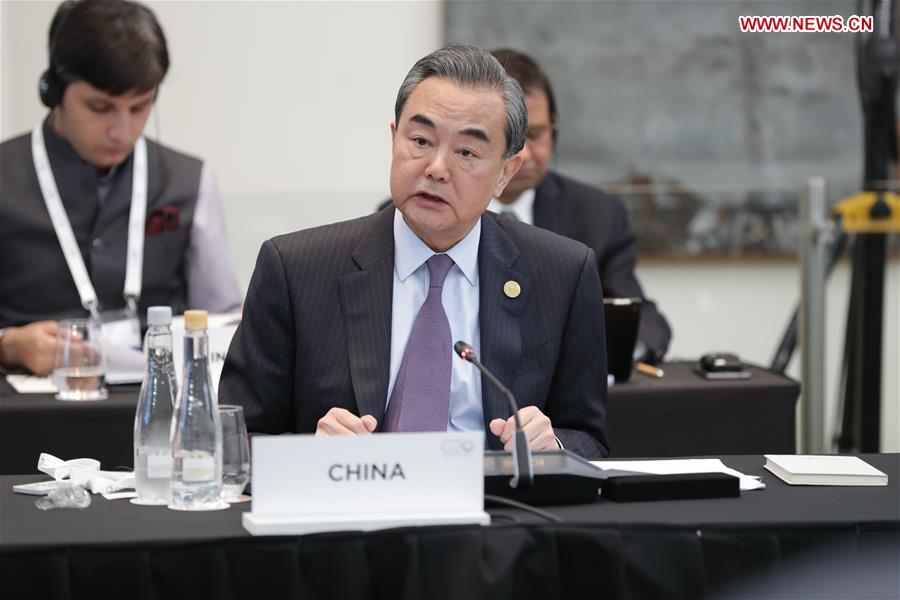 BUENOS AIRES, May 21 (Xinhua) -- The Group of 20 (G20) Summit, as a major forum for international economic cooperation, is responsible for creating more opportunities and support for developing countries by promoting global growth, a senior Chinese diplomat said here Monday.

Chinese State Councilor and Foreign Minister Wang Yi made the remarks while addressing the 2018 G20 Meeting of Foreign Affairs Ministers.

Wang said a lot of problems facing the world today are essentially related to development, adding that the imbalance between developed countries and developing countries has not seen a fundamental change, and that the world still faces pressing tasks of addressing environment, energy, climate change and food safety issues.

Adjustments of monetary policies by the world's major economies have had negative ripple effects on developing countries and added difficulties to resolve development issues, Wang added.

The Chinese side, Wang said, appreciates the Argentine side's decision to set "Building Consensus for Fair and Sustainable Development" as the theme of this year's G20 Summit and put issues such as infrastructure, future employment and food safety high on the agenda.

He urged giving prominence to development issues in global macro-policy coordination, saying that while advancing international cooperation in areas such as economy, finance, trade, energy and employment, a development perspective should be introduced to take into consideration developing countries' concerns, guarantee their interests and avoid bringing negative impacts on them.

Hailing the G20's unremitting efforts in helping developing countries, Wang said what is important is to bring consensuses into actions and bring actions to results.

"We should tap the potential of new technologies in such fields as information dissemination and inclusive finance, thus providing fresh impetus for poverty alleviation and development in developing countries," Wang said.

In order to jointly enhance support for developing countries, Wang said China is expecting more cooperation with G20 under the framework of the Belt and Road Initiative, which supports infrastructure construction and interconnectivity across the globe.

In addition, Wang called for implementing the decisions made by the previous G20 summits in China's Hangzhou and Germany's Hamburg to support the industrialization of Africa and the least-developed countries, as well as expand investment in Africa.

In doing so, Wang said investment programs should be proposed by Africa, agreed by Africa and led by Africa.

This year marks the 40th anniversary of China's reform and opening up. Looking into the future, Wang said, China, while realizing its own development, will strive to make greater contribution to the common development of humanity.

The 2018 G20 Summit is scheduled for November in Buenos Aires, and the ongoing foreign ministers' meeting is in preparation for the summit.