Wu Xingsheng tells his story about getting care and help from Pushuang Care Center and the civil affairs bureau of Hanyin county, Shaanxi province. [Photos by Zhao Xinying for chinadaily.com.cn.] 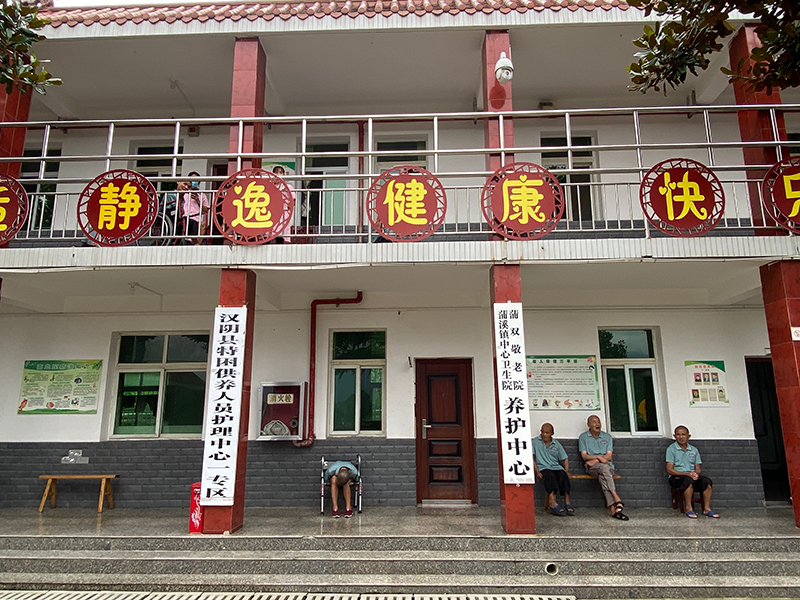 Pushuang Care Center, 12 kilometers away from the center of Hanyin county, Shaanxi province, completed construction in April 2016. It now houses a total of 130 people. Of them, 42 do not have family and lost the ability to take care of themselves because of old age or disability. [Photos by Zhao Xinying for chinadaily.com.cn.]

While trying to lift people out of poverty, the government of Hanyin county in Shaanxi did not leave a group behind that might be the most disadvantaged in society: those struggling in extreme poverty because of disability or old age.

Wu Xingsheng lost the ability to move or work because of an accident in 2003. The 40-year-old Hanyin resident has only one family member - his mother, who suffers from mental disorder and is also unable to take care of herself.

A turning point for Wu's life came in 2017, when he moved into a newly built care center for disabled and senior residents under the arrangement of officials from the bureau of civil affairs in Hanyin.

"Before coming to the Pushuang Care Center, I lived on my own and often had only one meal every two or three days and washed my clothes once a month because of my disability," Wu said.

"Now with the care of the workers at the center, I have three meals a day and my clothes are clean. I feel very happy about my life," he said.

What made Wu even much happier was that his mother was relocated to the care center, too.

Last month, with the help of the county's civil affairs bureau, Wu's mother, who has lived on her own in a village about 50 kilometers away from Hanyin, moved into the care center where Wu stays.

"My mother suffers from severe psychological disease and is unable even to recognize me, but I'm happy that my mother and I finally get together," he said.

"Thanks to the local government, I can see my mother and keep her company every day. Moreover, the government covers all of our expenses here, ensuring that both my mother and I can lead a comfortable life."

According to Shen Tao, director of the civil affairs bureau of Hanyin county, the care center completed construction in April 2016. It now houses a total of 130 people. Of them, 42 do not have family and lost the ability to take care of themselves because of old age or disability.

"By offering good care to these people, we have contributed to lifting the most disadvantaged group of people in our county out of extreme poverty," he said.