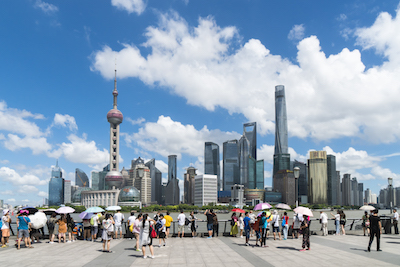 The view of Pudong seen from the Bund, Shanghai. (Photo: VCG)

BEIJING– With the ruling Communist Party of China (CPC) vowing to lead China into new era of progress, Shanghai has promised to build cooperation with more cities in Southeast Asia, including the Philippines, to boost its prestige as one of top global financial hubs.

“We are looking forward for more cooperation with other countries particularly in Southeast and South Asia,” Shanghai Municipal Foreign Affairs deputy director Fu Jihong in a recent interview with foreign journalists in Shanghai.

Shanghai is one of the four direct-controlled municipalities of the national government located in central east coast of China with over 24 million population.

It has become China’s most attractive city for tourists for the last 20 years with the Pudong district’s ultramodern skyline that include the Oriental Pear TV tower and the 632-meter Shanghai Tower, currently world’s second tallest building, as the main attraction.

A data from Shanghai Municipal Affairs Office also showed the city’s outbound tourists to Southeast Asia reached 1,774,566 with Thailand getting the highest share of 913,908 followed by Indonesia with 186,245 and Philippines with 172,802 visitors from Shanghai last year.

With the flourishing China-Philippines relations, the Philippine government is hoping to attract one million tourists from China this year.

Meanwhile, the economic trades between Philippines and Shanghai, a sister city of Manila, from January to August reached USD50 million with 0.8 percent increase from previous year.

“We pursued the opening up by strengthened our economic cooperation and people to people exchanges with other countries over the past years,” Fu said.

He is hoping that the Belt and Road Initiative, which got support from the Philippines, will boost further the tourism industry of Shanghai.

Shanghai took advantage the holding of the 19th CPC National Congress in Beijing by inviting a group of foreign journalists to showcase the city’s rapid development.

While in Shanghai, the 25 journalists from Southeast Asia and South Asia visited the Shanghai Media Group, one of largest media and cultural conglomerates in China, and other new media offices such as thepaper.cn, Knews and Ximalaya FM.

Shanghai Municipal Affairs office has also brought the foreign media to the site of the first CPC National Congress held on July 23, 1921 with only 13 delegates.

This year, the CPC held its 19th Congress attended by over 2,300 delegates representing the 89 million members and 4.9 million grassroots organizations of the 96-year-old political party which started to govern China in 1949.

In his report, CPC General Secretary Xi Jinping urged his comrades to uphold the thought of socialism with Chinese characteristics for a new era of China’s rapid growth and development.

Xi's call was centered on China’s two centenary goals – a moderately prosperous society by 2020 and a great modern socialist society by 2049.

President Xi promised that China, the second largest economy in the world, will continue to open its door to the world and “will never seek hegemony or engage in expansion.” (PNA)