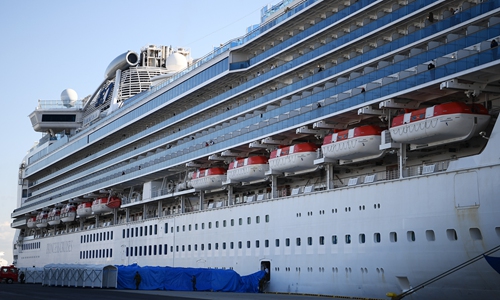 (Photo: AFP)
Passengers from China's Hong Kong region on a cruise ship quarantined in Japan due to coronavirus thanked the Chinese Embassy in Japan for sending medicine after 174 passengers were confirmed infected.
The ship, Diamond Princess, which has 3,711 passengers and staff and arrived at the port of Yokohama on February 3, has been kept in quarantine after a passenger on board from Hong Kong was found to be infected with the virus. Test results as of Wednesday show 174 confirmed patients on the ship, some from Japan, China, the US and Canada, according to information provided by the Japanese Ministry of Health, Labor and Welfare on Wednesday.
The Hong Kong passengers sent a "thank you" letter on Wednesday to the Chinese Embassy in Japan for the timely delivery of life-saving medicine in coordination of other departments, the embassy said.
"Thank you for everything you've done for us! Thanks to the great motherland for letting us be proud to be Chinese, because we have the support of our strong motherland when we meet difficulties abroad," said the letter.
The letter was sent after the embassy received help messages from Hong Kong residents on board since February 6 saying many elderly passengers, who suffered from diseases such as diabetes and high blood pressure were in urgent need of medicine. The embassy delivered the first batch of medicine to the ship on Monday, Zhan Kongchao, consul general of the embassy, told the Global Times.
"This is our duty. The embassy did what it should do," Zhan said.
About one week after the quarantine, the passengers sent a handwritten letter in Japanese seeking assistance from the Japanese government, Japanese media outlet Akahata Shimbun reported on Tuesday.
The letter mentioned six requests, including changing bed sheets which haven't been cleaned for nearly a week; sending medical professionals since the passengers' health has deteriorated; and providing appropriate information since the information on board was insufficient and causing anxiety.
The letter made a splash on Chinese social media with many netizens expressing their deep concern and care for the passengers, especially as Japan has been helping China fight the virus.
Several related topics trended on Chinese Twitter-like Sina Weibo. The topic "cruise ship quarantined in Japan with 3,700 passengers" has been viewed 150 million times as of press time.
"Sorry to hear that," a netizen said, urging the Japanese government and other medical organizations to save the passengers as soon as possible, which has been widely echoed by many other netizens.
Some said they are searching for ways to donate medical supplies to the passengers.
"Stay strong Japan, stay safe Japan" was another typical comment by netizens.