MILAN, Italy, July 5 (Xinhua) -- Few months after Italy signed a Memorandum of Understanding with China on the Belt and Road Initiative (BRI), experts from both countries met here on Friday to address common future challenges in a perspective of growing cooperation chances. 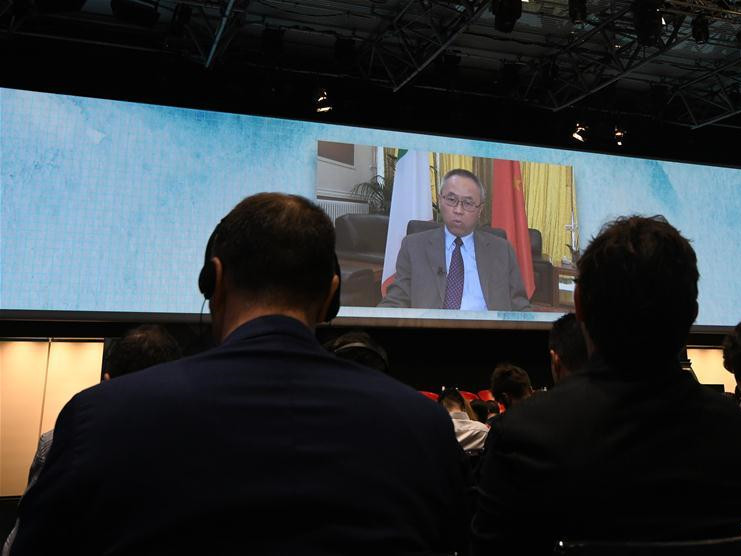 Chinese Ambassador to Italy Li Junhua (on screen) delivers a video speech at the second edition of the conference "Italy and the new Silk Roads" in Milan, Italy on July 5, 2019. Few months after Italy signed a Memorandum of Understanding with China on the Belt and Road Initiative (BRI), experts from both countries met here on Friday to address common future challenges in a perspective of growing cooperation chances. (Photo: Xinhua)

Gathered at the Milan stock exchange for the second edition of the conference "Italy and the new Silk Roads", entrepreneurs, officials and experts exchanged points of views and expectations.

Their debate stretched over a wide range of sectors, including infrastructure, digital economy, culture and tourism, investment, banks, and legal counselling to companies willing to expand in third countries involved in the BRI.

"From the point of view of the government, we do believe this was the right thing to do for our companies and our exports," Italian Deputy Minister of Economic Development Michele Geraci told Xinhua.

"Although it is still early to talk about the effects (of the Memorandum), we are seeing some initial results... a growing interest on the side of Chinese companies to engage with Italian counterparts to do business," the official said.

Overall, the sectors in which Italian authorities sounded willing to boost economic ties with China were much varied.

"We are interested in energy sector, food and beverage, technology, tourism, airlines -- with the opening of new routes -- insurance, finance... and of course manufacturing, where Italy and China can either compete or cooperate," Geraci explained.

China and Italy signed the Memorandum of Understanding (MoU) to jointly advance the construction of the Belt and Road in late March in Rome. Proposed by China in 2013, the BRI aimed at building a trade and infrastructure network connecting Asia with Europe and Africa.

"This is one possible crucial driver in the future development of Sino-Italian relations (under the BRI)," Panerai told the audience.

Chinese Ambassador to Italy Li Junhua and his Italian counterpart Ettore Sequi from Beijing contributed to the debate with video speeches, both stressing the overall magnitude of the BRI project, and recalling the ancient cultural and commercial ties connecting China and Italy through history.

On their part, businesspeople and experts tackled specific aspects of the partnership that could further arise as result of a strengthened cooperation under the BRI.

"With the new Silk Roads, a major boost will be given to logistic infrastructures that today do not even exist," stressed Paolo Romiti, business development executive director of infrastructure group Salini Impregilo.

His warning did not come by chance, since the lack of infrastructures is considered here as one of the major weaknesses hampering Italy's further development, and especially in some central and southern regions.

On their part, Chinese entrepreneurs also appeared eager to find new opportunities in Italy, counting on the changes that the cooperation under the BRI might provide.

"Now, from the logistic point of view, our main airports for cargo shipment (in Europe) are still Amsterdam and Frankfurt," Fan Erning, Vice-President of Shanghai-based Eastern Air Logistics, told Xinhua.

Among the various stakeholders taking part in the event, Italian e-commerce and digital retail companies seemed to look at a comprehensive project such as the BRI as a chance to improve their own performance.

"One relevant issue (for Italy) is to make sure the logistic and infrastructure development attached to the BRI will result in an opportunity for us to rebalance the online trade exchange with China," Roberto Liscia, president of Italian e-commerce consortium Netcomm, told Xinhua.

The consortium Liscia represents about 400 Italian e-commerce companies, and was among the founding entities of Ecommerce Europe, the European Electronic Commerce Association gathering over 70,000 firms in some 20 countries.

The entrepreneur stressed that China would provide today an example in terms of digital innovation, also beyond the BRI project.

"China has developed models in terms of consumers' behavior, purchase, and technological development that Italy should absolutely try to follow, as example of innovative processes that could allow Italy's small enterprises a qualitative leap," he explained.