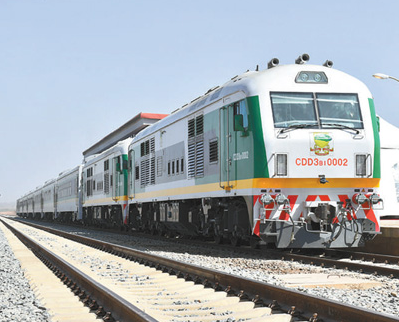 A BBC opinion survey from last year suggests that 83 percent of Nigerian respondents believe that China has played a positive role in the world, ranking the highest among the 19 sample countries. In response, many Chinese netizens refer to the nation as “Nigerian buddies.”

Although China and Nigeria are separated by thousands of miles, peoples of the two countries are united in heart and mind. In this sense the nickname “Nigerian buddies” is appropriate. Since the establishment of diplomatic ties between China and Nigeria 47 years ago, the mutually beneficial bilateral cooperation has helped the two countries and their peoples. The successful projects and exchanges on an equal and sincere footing have been witnessed and remembered by the people of Nigeria.

Take the renowned “Abuja-Kaduna Railway” as an example. With an average speed of 150 kilometers per hour, the 186.5 kilometers long railway is one of the major achievements of both countries.

When the railway was opened to traffic on July 26, 2016, Nigerian President Muhammadu Buhari and other government officials became its first passengers.

“Today, we have opened a safe, fast, modern and comfortable railway for Nigerians. The railway will provide an essential traffic route connecting the capital area and Kaduna State, aiming to build a promising economic corridor for industrial, agricultural and human resource development,” Buhari said.

As the first African modern railway that completely uses Chinese technology, Chinese standards and Chinese equipment, the opening of the Abuja-Kaduna Railway means the end of the era where there were no standard railroads in the country. It has helped ease the traffic load and foster local residents’ confidence to advance their nation’s development.

Both the Nigerian government and Nigerians think highly of China’s assistance. The construction of the railway employed 16,738 local people altogether, indirectly created nearly 150,000 job opportunities, and boosted the development of local industries including cement, steel and asphalt.

After the opening of the train, Chinese companies have provided comprehensive skills training and technical support to nurture railway operations and management experts. The train has carried more than 610,000 passengers in total with an on-time rate of 99 percent, and a satisfaction degree of over 95 percent, making it the preferred mode of transportation for local travelers.

Abuja-Kaduna Railway is only an example of Sino-Nigerian cooperation. As the most populated nation and the largest economy in Africa, Nigeria is China's largest overseas engineering contracting market, second largest export market, third largest trading partner and a major investment destination in Africa.

Actually, these “Nigerian buddies” are only a small example of China’s “African buddies.” As this September’s China-Africa Cooperation Forum Beijing Summit is approaching, delegations from Nigeria and other African countries are willing to head to Beijing. The joint efforts to build the Belt and Road initiative between China and Africa will broaden new prospects for the strategic partnership.

President Buhari recently said that since Nigeria’s independence no country has been able to assist them in advancing infrastructure construction like China has. Nigeria sincerely thanks China for its support in financing and technology. His remarks truly reflect his people’s will. Sino-Nigerian cooperation has been deeply rooted in both peoples’ hearts.

Against this background, the recent deliberate distortion of Sino-African cooperation in the international community has triggered denials by Nigerian media — Western media’s distortions are not persuasive because action speaks louder than words and practical cooperation is the only right path.

(The author is the Chinese ambassador to Nigeria. )