Russia remains in a position to select countries and be on guard against China's role in RFE.

Russians can learn from the development model of China's southern city of Shenzhen. 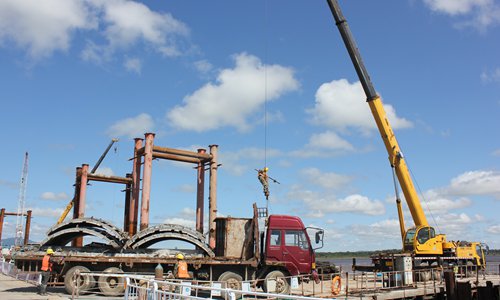 Chinese workers grab every minute of their short winter day along the Heilongjiang River building their part of the China-Russia Tongjiang Rail Bridge in 2015. Photos: IC

Frozen grounds, cold winds and long nights - these can be a nightmare for any construction team. But this is what employees of the China Railway Major Bridge Engineering Group grappled with in past winters while building the China-Russia Tongjiang Rail Bridge crossing the border between China and Russia. The bridge is expected to trigger a commercial and infrastructure development boom in the cross-border economic corridor, along with a larger flow of cargo and people.

Scheduled to be finished this year, the 2,280-meters bridge (about 1,900 meters of which is built by China) connects Tongjiang city in Heilongjiang Province to Nizhneleninskoye in Russia. It is one of the most important infrastructure projects to promote the implementation of the "plan for building the China-Russia-Mongolia Economic Corridors." The Chinese construction team nearly completed the major parts of the project in China over an intense 14 months in 2015, wining global praise.

With both countries embracing the upcoming year of China-Russia local cooperation and exchange, its completion is a veritable gift to facilitate China-RFE cooperation, together with joint projects in other fields between the two countries in RFE.

Sino-Russian cooperation and large joint projects under the Belt and Road Initiative have stepped up across the energy, finance, high-speed rail, infrastructure and science and technology sectors over the past decade, which turns the rhetoric of partnership between China and RFE into tangible benefits.

The influx of Chinese investment also may amplify xenophobic sentiments among Russian nationalists, who worry the Far East might be "Sinicized" after a massive arrival of Chinese capital, technology and services. But sensible Russians are standing out, calling for putting aside the "high alert" and seizing a great opportunity for development.

Meanwhile, as China's vision of a more active role in regional and Asia-pacific affairs is visualized, a rivalry over RFE between important economies in Asia may be tempered by unfulfilled expectations. At the construction site of the China-Russia Tongjiang Rail Bridge, dozens of workers were packed inside a hand-built barrack for warming themselves in the local -20 C climate.

As the Heilongjiang River is a seasonally frozen river, the typical "150 days of freezing" cut their actual working days in half. "The effective working hours are very limited every day. We have nothing to do but work hard before the sun sets," recalled Lu Bo, head of the construction team at the site.

China's leading construction team for this project, whose speed and efficiency has "deeply impressed" Russian governors, is the epitome of dozens of Chinese government-invested construction projects in RFE.

In the past two years, the Russia Far East Area has absorbed $9 billion in foreign investment, of which 80 percent comes from China, which is how Russian president Vladimir Putin introduced RFE at the Eastern Economic Forum in 2017.

According to data provided by the Ministry for the Development of Russian Far East, Chinese enterprises increased by one-third in 2017. The 28 joint projects committed to the area are valued at $4 billion, accounting for 35 percent of overall foreign investment in the Far East over the past three years.

One of the main thrusts lies in the hydrocarbon sector. A $400 billion, 30-year contract was signed by Russian gas giant Gazprom and China National Petroleum Corporation in 2014 to supply gas to China.

Beyond the resource-extraction industry, China's Tianjin Port Group signed a memorandum of understanding for cooperation with Commercial Port of Vladivostok Group in June of 2017 to promote the two ports' integrated development and respond to China's international Belt and Road Initiative.

A well-known project - International Transport Corridor Primorye 1 and Premorye 2 - is expected to encourage trade and investment in the Russian Far East. Improved transportation infrastructure will significantly increase cargo transit within a shorter time frame between northeast China and the Russian port city of Vladivostok. 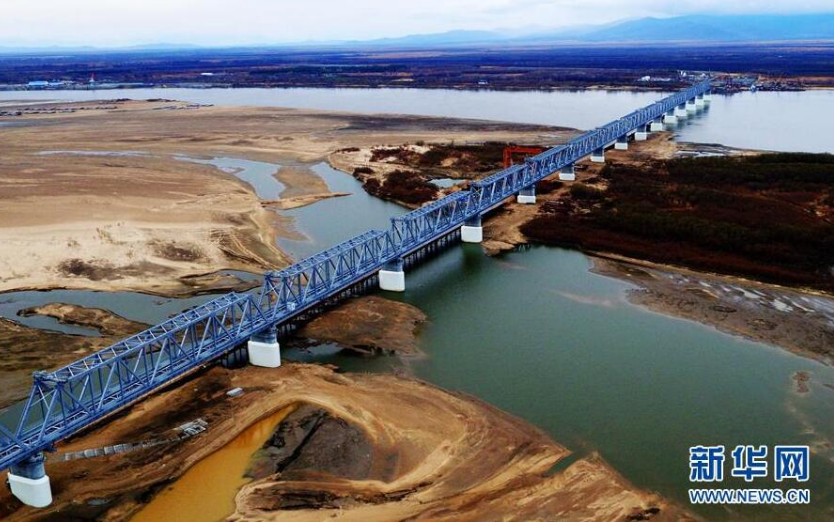 The main body of a railway bridge connecting China and Russia. (Photo: Xinhua)

With Russia's increased promotion of its economic development in eastern territories as a new strategic imperative, foreign investment in this area is becoming increasingly crucial.

In August of 2017, Russia started issuing e-visas to citizens from 18 countries, China included, for visiting Russia's Far East. This new visa will allow travelers to enter Russia through the border crossing in the Free Port of Vladivostok or Vladivostok International Airport (VVO).

Russia, which is among the top-two exporters of crude oil and dry natural gas in the world, aims to diversify its economy by utilizing the Vladivostok free port and 12 other social-economic zones in the nation's Far East region. China, with its plan of revitalizing its own northeast provinces, now arrives as a competent commercial partner for RFE.

Many Asian countries such as Japan, South Korea, Mongolia and India are all showing interest in developing RFE.

Expert Chen Yurong, from the China Institute of International Studies, suggests that "other countries are relatively less competitive than China in terms of either the strong Sino-Russian relationship or China's economic power and consumption ability."

However, Li Yonghui, a researcher at the Russian studies centre of Chinese Academy of Social Sciences (CASS), disagrees with such supremacy granted for China.

"Russia is in fact preventing China's investment from becoming an oligarchy across the RFE region by reserving more opportunities for other Asian countries like Japan and South Korea, and weighing the potential of China and Japan for serving Russian interests, in order to maximize its profit from competition," Li told the Global Times.

As reported by Russian state media Sputnik, the Ministry for the Development of the Russian Far East announced in November of 2017 that Japan has invested $100 million in new projects in the Far East, which exceeds the amount invested by other partners in Russia's Asia-pacific regions, including China, South Korea and Vietnam.

Sharing a geopolitical worldview of multipolarity, Russia proposes to increase Japan's investment in the Far East to $1 billion over the next two years, which may kick off a "tug-of-war" over this abundant reserve.

Wang Chenxing, another researcher from CASS, regards this "open mindset," which he believes is an essence of the Shenzhen development model, as the most important thing for RFE to absorb.

Garitsin, a manager at a local oil-pressing mill located in Amurskaya Oblast Advanced Special Economic Zone, told the Global Times in a previous interview that they are confident they will expand their national market share to one-fifth within the following year, because their "whole set of soybean production line in the oil extraction factory is provided by China."

"China is a very reliable partner that we wish to learn from," said Garitsin. But a few Chinese experts are concerned about this determination. Li Yonghui suggests that forging a "Russian Shenzhen" is less practical because of Russian's political and cultural conservatism.

"It is really hard to expect Russia to open its Far East as completely as China's Shenzhen did," Li said. "For a country like Russia, which puts security assurance over economic benefits, it is reasonable to see RFE close itself in the future once they detect any adverse factors against its security or ecosystem."

RFE's degree of openness may also be challenged by raised anxieties and tensions among local residents. An influx of Chinese investment may even amplify xenophobic sentiments among Russian nationalists.

A rise in Chinese migrants to the Far East - a side effect of Chinese investment - is reportedly perceived by locals as a threat of China's population expansion. Many on the Russia side worry that the Far East might be "Sinicized" after a massive arrival of Chinese capital, technology and services.

There is a claim that the economic Sinicization may, sooner or later, set the stage for the erosion of geopolitical control. Others fear that China's exclusive economic penetration of RFE may turn it into a raw material appendix of China.

Over 50,000 Russians signed an online petition in January of 2018 to ban all Chinese from land purchases at Lake Baikal. The petition was addressed to Russian politicians including President Vladimir Putin. Other petitions are calling for an end to the felling of Far East Siberian forests to export timber to China.

"These petitions are not a blind challenge against the Chinese, but serve more as an alarm to assert local's ecological pursuit," Xu Hua, a Sino-Russian relation expert from CASS, told the Global Times.

Sergey Sanakoev, president of the Russian-Chinese Analytical Center, has appealed to Russian nationalists that "if we continue this kind of high alert, we will risk losing a great chance for development."

"Russia's attitude toward Chinese investment is complex, with lingering fears attached. They hope to take advantage of Chinese capital for their economic development, but have concerns about their land turning into a raw material appendix of China," Xu Hua, explained.

China may soon transfer more enterprises to RFE, from construction projects to telecoms services. For the moment, Russia remains willing to accept them as long as they meet ecological standards.