BRI NEWS Sluggish Chinese investment in US to persist in 2019, casting shadow over bilateral ties

Sluggish Chinese investment in US to persist in 2019, casting shadow over bilateral ties

Sluggish Chinese investment in the US last year, resulting mostly from tougher US screening of high-technology acquisitions, is set to persist this year, analysts noted on Tuesday, suggesting that China should expand investment in other markets like Russia to strike a balance. 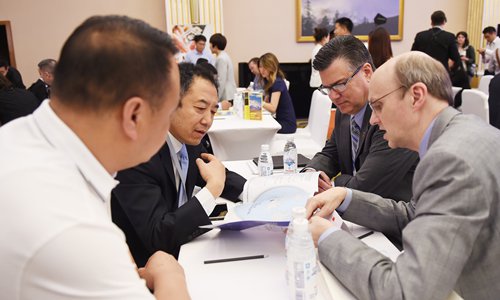 Investors at a China-US cooperation fair held in Chengdu, capital of Southwest China's Sichuan Province in May. (Photos: VCG)

Several reports released in recent days by international consultancies and law firms showed that China's outbound investment in the US has been hit hard by the dark clouds hanging over bilateral relations.

According to a report released by New York-based research company Rhodium Group on Sunday, China's foreign direct investment (FDI) in the US, including greenfield investments and acquisitions, slumped by 84 percent on a yearly basis to $4.8 billion in 2018, the lowest level in seven years and a dramatic decline from $46 billion in 2016, according to the report.

Another report, released by international law firm Baker Mckenzie released on Monday, showed that China's FDI in North America and Europe fell 73 percent year-on-year to a six-year low of $30 billion in total.

Shen Yuxin, a partner of the Freshfields Bruckhaus Deringer law firm, told the Global Times that increasing US restrictions on overseas investment in the high-technology sector should account for 70 or 80 percent of the slide in Chinese investment in the US.

"Tougher reviews by the Committee on Foreign Investment in the United States (CFIUS) starting from 2017 have locked out a number of Chinese investment proposals in the US, both known and unknown to the public," Shen said.

One example was the US government's block of US money transfer company MoneyGram's sale to Alibaba over security concerns.

According to Shen, Chinese capital mostly flowed into the finance, high-tech and real estate sectors in the US. The first two areas are largely blocked by tighter US restrictions, while property investment was cut off by the Chinese regulators for fear of capital outflows.

Shen said that Chinese investors can do little about the situation, except turn to other markets for technology acquisitions such as Israel and Singapore, if US doors are closed.

He added that China's FDI in Europe also declined in 2018, though to a lesser extent than the fall in US-bound investment.

In contrast, China is opening its arms to foreign investment, with moves such as encouraging the establishment of Tesla's plant in Shanghai and revealing the government's plan to further shorten the negative list this year.

"I think this opening-up attitude will give China more weight in its trade talks with the US," He Weiwen, an executive council member of the China Society for World Trade Organization Studies, told the Global Times on Tuesday.

Although China's outbound investment is facing difficulties in the US and Europe, overall it has managed to strike a balance with increasing investment in other regions, official figures showed.

According to statistics released by the Ministry of Commerce (MOFCOM) in December, China's overall outbound investment reached $104.48 billion in the first 11 months last year, about the same as the previous year.

China's investment in smaller countries and regions, like those along the routes of the Belt and Road initiative (BRI), has risen accordingly. According to MOFCOM figures, China's investment in BRI markets was up 4.8 percent year-on-year in the first 11 months last year.

The Baker McKenzie report showed that China's investment in Canada grew by 80 percent on a yearly basis in 2018.

According to experts, the US' scrutiny of Chinese investors won't change in the short term, so Chinese companies should avoid large-scale acquisitions in the US.

"Maybe they can take a stake in their US business partners to bypass US restrictions," He suggested, adding that China can diversify its investment geography by such means as investing more in BRI markets or resource-rich Russia and Southeast Asian countries, which have an industrial advantage.