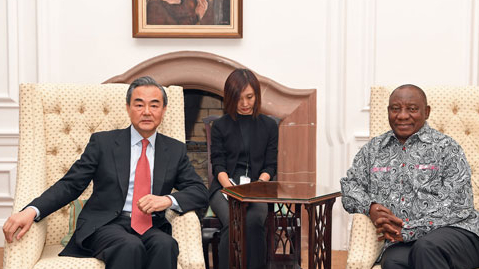 Ramaphosa reiterated South Africa's adherence to the one-China policy, and noted that it is a great honor for the nation to attend the first China International Import Expo (CIIE) in Shanghai in November.

Conveying Chinese President Xi Jinping's greetings to Ramaphosa, Wang Yi said this year is an important year for Sino-South African relations. He added that the two sides should support each other in the coming BRICS summit and the Forum on China-Africa Cooperation (FOCAC) summit, and propel bilateral ties to a new stage.

"The comprehensive strategic partnership between China and South Africa should not only safeguard the common interests of the two countries and developing countries, but also be more pragmatic, effective and more beneficial to the people," Wang noted.

The new FOCAC summit will be held in Beijing in September, with focus on the China-proposed Belt and Road Initiative.

In 2010, the China-South Africa relationship was upgraded to a Comprehensive Strategic Partnership. Trade between the two countries increased from 17 billion US dollars in 2012 to 22.5 billion dollars in 2013.