Xi'an is one of China's most famous and fascinating cities, its very name conjuring up images of enigmatic terracotta warriors and exotic Silk Road caravans. At the height of its prominence during the Tang dynasty (618-907), Xi'an, then known as Chang'an, was one of the world's largest and most populous cities, although its history actually stretches back more than 6,500 years to the Neolithic period. Today, although Xi'an is marching toward modernity along with the rest of China, the city still retains its historic charm, full of ancient cultural relics and ringed by towering Ming dynasty city walls.

Xi'an has much to offer, from ancient attractions to modern trade and industry opportunities.

Xi'an offers something to delight every kind of visitor, from the literature lover to the photography enthusiast to the shopaholic. The cultural and tourism sector has become a key industry in Xi'an, accounting for more than 12 percent of its GDP. In recent years, tourism revenue in Xi'an has expanded at an average annual rate of more than 25 percent. In 2019, trips to Xi'an exceeded 300 million and total tourism revenue surpassed 300 billion yuan ($44 billion). An aerial photo of Xi'an City/Xinhua

It is history buffs though who will find the most to love about the city. Xi'an served as the imperial capital of 13 dynasties and is filled with important sites and relics created by proud emperors and their courts. No visit to Xi'an is complete with a trip to see the UNESCO World Heritage-listed terracotta warriors (officially known as the Mausoleum of the First Qin Emperor) but there is much to discover besides. Xi'an has more than 157 museums, though the best place to gain an overall picture of the history of the ancient capital is the Shaanxi History Museum, which houses more than 1.7 million pieces in its collection. 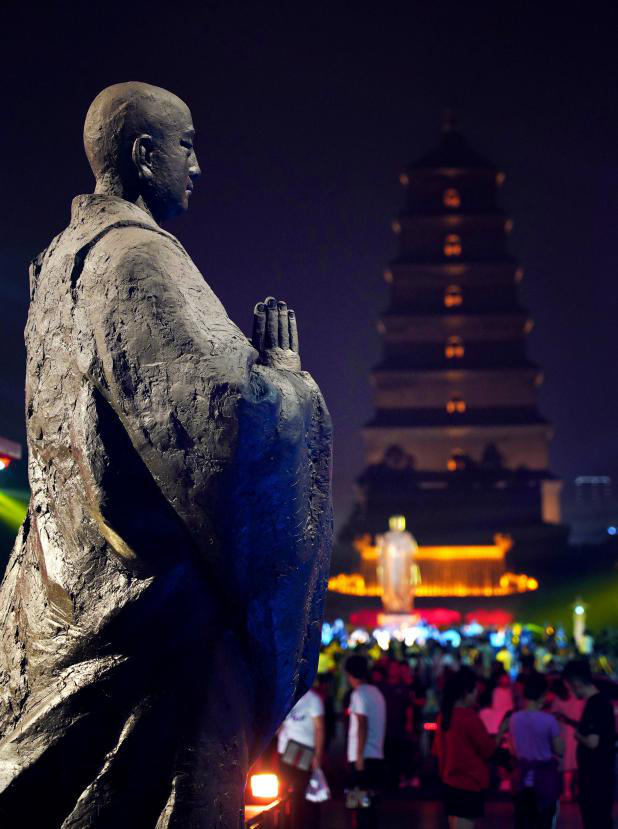 Just southeast of the Shaanxi History Museum, the Big Wild Goose and Small Wild Goose Pagodas offer a taste of the city's religious history. The seven-story Big Wild Goose Pagoda is one of the best extant examples of a Tang dynasty pagoda in China, distinguished by its square structure (as opposed to the usual round constructions). The pagoda was built in 652 to house Buddhist sutras brought from India to China by the monk Xuan Zhang, whose journey inspired one of the most famous works of Chinese literature, Journey to the West.

For thousands of years, journeys like the one taken by Xuan Zhang have meant that Xi'an is situated at the intersection of East and West. Since Han dynasty diplomat Zhang Qian blazed a trail westward from Chang'an more than 2,000 years ago, trade and traditions from around the world have flowed along the Silk Road, shaping Xi'an's uniquely cosmopolitan culture. Nowhere is this more apparent in the city's cuisine, which blends the traditional wheaten dishes of Shaanxi province with Muslim dishes passed along the Silk Road. Traditional local dishes include Biang Biang noodles topped with sizzling chili oil, shredded flatbread in mutton soup, and Rou Jia Mo, otherwise known as the“Chinese hamburger.” 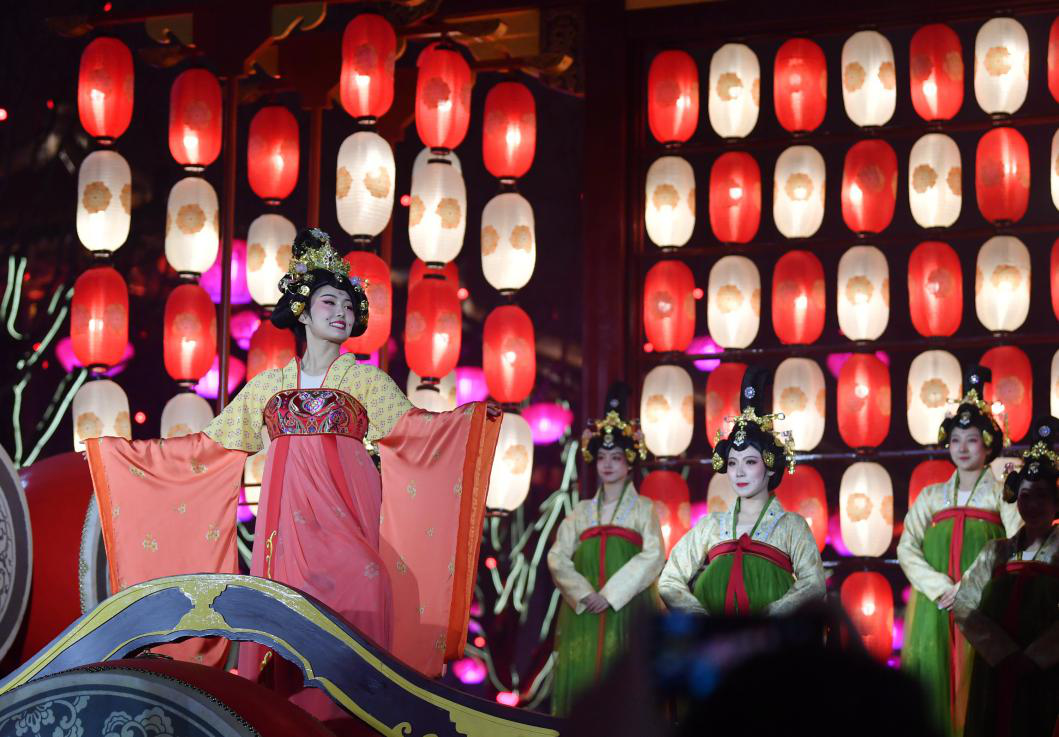 The Muslim Quarter is the best place to sample the delicious cuisine of Xi'an. This bustling area stands as a testament to the cosmopolitan history of the city, and today it is one of the most popular destinations for both local and foreign tourists. A stroll around the Muslim Quarter's winding alleyways is a feast for all the senses: the sound of fresh wheat dough slapping on a wooden board; the smell of lamb and beef kebabs coated with cumin and chili; the vibrant colors of spices and sweetmeats from all over Asia.

Beyond food, immersive experiences are transforming the way residents of and visitors to Xi'an are experiencing its culture. Local areas throughout the city have taken advantage of their cultural tourism resources to launch a series of cultural and artistic activities, including antiques fairs, musical fountain shows, reenactments of Tang dynasty ceremonies, and live performances. On April 25, 2020, the strains of Western and Chinese classical music echoed over the heads of the terracotta warriors, as more than 3 million viewers watched a pioneering live-streamed concert from the Mausoleum of the First Qin Emperor. Organized professional events like this are now commonplace, meanwhile, the streets of Xi'an often become an impromptu concert hall, with local people gathering to perform Qin opera under the city walls or aspiring rock stars performing to onlookers near bustling malls. 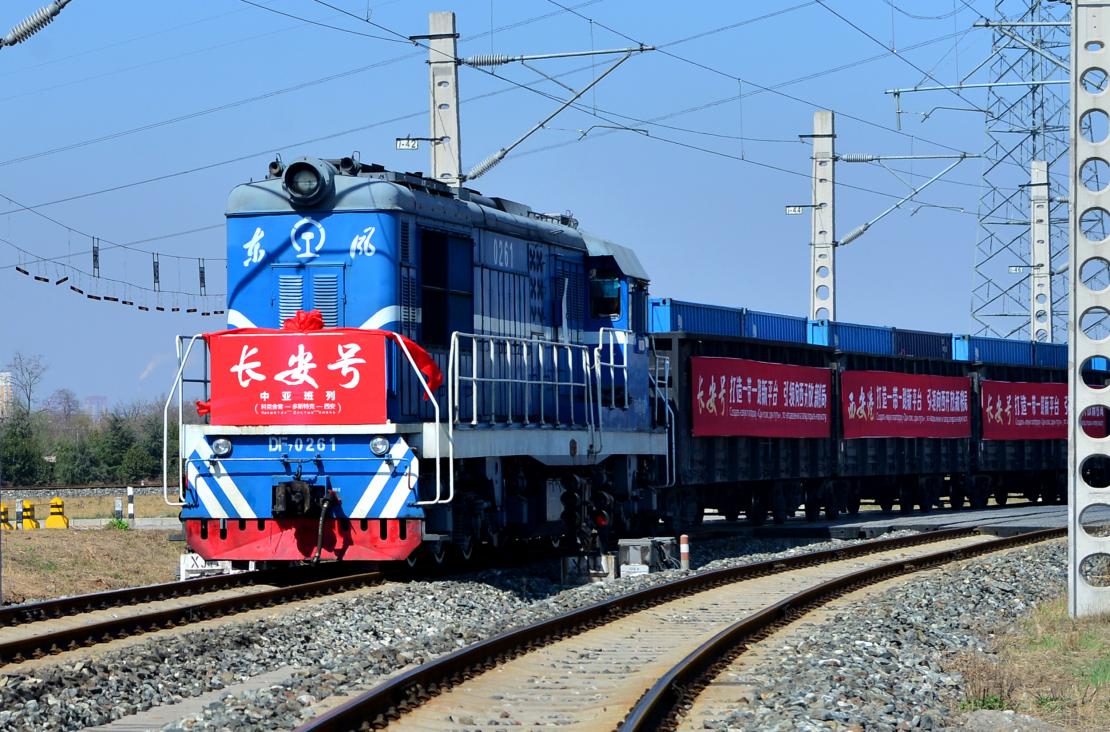 The first return train of the Central Asian train “Chang'an” loaded with 2,000 tons of Kazakh oil slowly drives into the freight yard of the Xinzhu station of Xi'an Railway Bureau on March 26, 2016/Xinhua

More than 2,000 years after the Silk Road was first established, a modern silk road is taking shape. Dusty camel caravans have transformed into cutting-edge freight trains, connecting China with Central Asia, the Middle East, and Europe. Since the first China-Europe Chang'an freight train departed from Xi'an on November 28, 2013, the number of trains along the route has expanded to more than 2,000 each year. In addition to goods such as vehicles, textiles, and liquid crystal displays, many of which are made in Xi'an, the China-Europe Chang'an freight train has also transported nearly 13,000 tons of epidemic prevention materials since the start of the COVID-19 pandemic.

It is not just goods that flow along the new Silk Road. Xi'an is also promoting and exporting its scientific and technological prowess. The number of scientific research institutes in Xi'an is second only to a few of China's biggest cities The city is also at the forefront of hard and core technology development, which refers to revolutionary technologies with far-reaching economic and social influence, including artificial intelligence, aerospace, biotechnology, new energy, and intelligent manufacturing. The city is home to more than 3,000 high-tech enterprises and nearly 460,000 professional and technical personnel, as well as 20,000 foreigners, attracted by the city's excellent universities, research institutes, and up-and-coming industries.

With its fascinating blend of the ancient and the modern, Xi'an is a bucket list destination for Chinese and international travelers alike. This dynamic, historic city is thriving and looking forward to welcoming more people from around the world to discover its stories and accelerate its progress towards becoming an international metropolis.