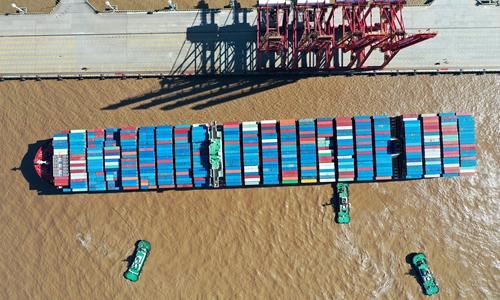 A spike in COVID-19 infections outside China, notably in South Korea and Japan, is sending shockwaves through semiconductor supply chains, darkening prospects for the Asian economy, an enabler of growth across the globe, market watchers said.
In a note sent to the Global Times, Singapore-based DBS economist Ma Tieying wrote that the virus outbreak would "interrupt the long-awaited cyclical recovery in South Korea," citing supply chain disruptions and cooling demand in the Chinese market.
As much as 41 percent of the East Asian nation's intermediate goods exports were destined for the Chinese market while 23 percent of its imports falling into the category were sourced from China, according to the research note, which revised down GDP growth for South Korea to 2.2 percent from 2.4 percent previously for 2020.
A surge in infections arguably put South Korea's reliance on semiconductor exports to the test, analyst said.
South Korea reported another 231 cases of the novel coronavirus pneumonia on Monday, bringing the total infections to 833, including seven deaths, South Korea's Yonhap news agency reported, the largest number outside China.
The fast-spreading virus had South Korean President Moon Jae-in on Sunday putting the nation on the highest alert in its battle against the epidemic.
In a sign of panic among investors, shares of South Korean flash and DRAM maker SK Hynix closed down 3.4 percent on Monday, while the nation's benchmark Kospi index tumbled nearly 3.9 percent to post its worst day since October 2018.
SK Hynix has reportedly closed some of its facilities and has sent 800 of its employees home for self-quarantine after a new recruit was found to have contact with a confirmed patient.
Samsung Electronics saw its shares plummet 4.05 percent while LG Electronics lost 4.24 percent.
The shock to Japan's markets, which were closed for a holiday, is yet to be seen.
Japan has now confirmed 147 cases, not including the cases on the ill-fated Diamond Princess cruise.
Semiconductor shares, however, led the gains on the Chinese mainland stock market on Monday where the tech-heavy ChiNext finished up 1.68 percent.
Yangtze Memory Technologies Co, one of China's most advanced memory chipmakers, declined to comment on the virus disruption to supply chains when contacted by the Global Times on Monday.
The Wuhan-based memory chipmaker previously revealed to the Global Times that it is maintaining normal production and operations, and its raw material supplies and shipments are running smoothly.
Shanghai-listed smartphone contract manufacturer Wingtech Technology Co didn't respond to a request for comment by press time.
Also worth noting is that the disease is seen spreading far beyond Asia, with Italy now becoming the largest national total outside Asia with 157 cases including three fatalities.
The IMF on Saturday said the virus will likely knock 0.1 percentage points off global growth to 3.2 percent. The economic consequences of the virus outbreak are contingent upon the government's epidemic controls, Lu Zhengwei, chief economist at Industrial Bank in Shanghai, told the Global Times on Monday.
If restrictions on flows of people and goods are not imposed in an all-around way, the effectiveness of the epidemic controls remains to be seen, Lu said.